Not so Silly Putty: UM researchers use one of its components to turn stem cells into spinal cord cells 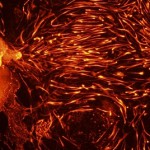 Crain’s Detroit Business is long overdue for a story or blog on Silly Putty. Better late than never, here we go:

As it turns out, a main component in silly putty helps stem cells that are being grown in culture turn into the specialized cells researchers need.

The component is called polydimethylsiloxane, and it provides a sponginess that aids stem-cell differentiation, according to a study by University of Michigan researchers published Sunday in the online journal Nature Materials.

The researchers coaxed human embryonic stem cells to turn into working spinal cord cells more efficiently by using a soft, ultrafine carpet of the silly stuff than by using other media.

Jianping Fu, an assistant professor of mechanical engineering, says an easier way to more efficiently guide stem cells to differentiate into the more than 200 cell types that make up the human body can potentially help provide therapies for such diseases such as amyotrophic lateral sclerosis (Lou Gehrig’s disease), Huntington’s or Alzheimer’s.

Fu and his colleagues designed microscopic posts on which to place the Silly Putty component. The shorter the post, the stiffer the surface cells grew on. The long the post, the softer and more plush the surface.

“This is extremely exciting,” Fu said in a news release. “To realize promising clinical applications of human embryonic stem cells, we need a better culture system that can reliably produce more target cells that function well. Our approach is a big step in that direction, by using synthetic microengineered surfaces to control mechanical environmental signals.

“Our work suggests that physical signals in the cell environment are important in neural patterning, a process where nerve cells become specialized for their specific functions based on their physical location in the body,” he said.

Fu and his fellow researchers also verified that the new motor neurons they grew on soft carpets showed electrical behavior similar to those of neurons in the human body.

Dr. Eva Feldman is the Russell N. DeJong Professor of Neurology at UM and the lead researcher on ongoing human trials involving the injecting of embryonic stem cells into subjects with Lou Gehrig’s Disease, which paralyzes patients as it kills motor neurons in the brain and spinal cord.

She’s using Fu’s technique to try to make fresh neurons from patients own cells and hopes to try it in humans in the future.
“Professor Fu and colleagues have developed an innovative method of generating high-yield and high-purity motor neurons from stem cells,” Feldman said. “For ALS, discoveries like this provide tools for modeling disease in the laboratory and for developing cell-replacement therapies.”

And possibly for replacing the embryonic stem cells now being used in current human trials, which continue to draw the wrath of some religious conservatives.

The paper is titled “Hippo/YAP-mediated rigidity-dependent motor neuron differentiation of human pluripotent stem cells.” Fu collaborated with researchers at the School of Dentistry and the Department of Molecular, Cellular and Developmental Biology in UM’s College of Literature, Science, and the Arts.

Silly Putty was invented by Earl Warrick, a scientist at Dow Corning Corp., during World War II, when the War Production Board was searching for a substitute for rubber.

As a rubber substitute, his silicone compound was a failure. It was far too pliable. But it could be molded like clay and soak up images on newspaper pages.

Ruth Fallgatter, the owner of a toy store in New Haven, and Peter Hodgson, a marketing executive, saw the material’s potential and began advertising it as Silly Putty.

It was one of the biggest toy hits of the 1950s and made Hodgson a millionaire.