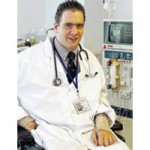 Post, 43, a Hanover Township native and nephrologist living in Manhattan, knows what it’s like to scrounge around in the dregs, and then soar out of them to lead a fulfilled life.

Post is quadriplegic. He’s had limited use of his arms and hands and has been confined to a wheelchair since age 14. He is paralyzed from the chest down.

A tragic accident, a shallow dive at Boy Scout camp in 1985, caused a spinal cord injury that should have cancelled any aspirations for a normal life.

But Post wouldn’t be held down by his disability.

He now works as a kidney specialist in James J. Peters VA Medical Center in the Bronx, N.Y., and he is helping veterans with debilitating injuries and illnesses realize that a lifestyle change doesn’t mean life is over.

“They know just from the fact that I’m living out of a wheelchair; I think they get a sense that I know what it’s like to be in the system,” Post said. “I know both sides of the stethoscope, I like to say.”

It was his doctors’ care while recovering that inspired him to pursue medicine after graduating from Bishop Hoban High School.

After he graduated from a pre-med program at King’s College, Post found himself at the center of a national debate when every medical school in Pennsylvania rejected his application.

“Some of my friends with the same grades or even lower than mine were going to medical school,” Post said. “I got a lot of letters saying it was because of my medical disability.”

Post was editorialized up and down. He was featured on talk shows and in the pages of The New York Times and The Philadelphia Inquirer.

Admissions officers questioned Post’s ability to perform thorough examinations saying a doctor must be able to use stethoscope and examine patients with his hands to feel for bumps and abnormalities (he performs these functions regularly).

He soon found himself on a TV talk show set in New York City. Herbert Schaumberg, a physician from the highly-rated Albert Einstein Medical College in the Bronx, N.Y., had been invited to sit in with Post.

The talk show host asked Schaumberg if Post should apply to Albert Einstein. Schaumberg said yes, and Post once again, began a lengthy application process. He was accepted.

Working through medical college and on to a residency program, Post turned his focus toward kidney health, a field in which he can make diagnoses and order treatment regimens through mostly cognitive skills rather than tactile.

“I chose the kidneys because I really like internal medicine,” Post said. “Being a kidney specialist, it involves many other systems … lots of physiology. It’s something that I was realistic in what I could do. I was thinking, what can I do in a wheelchair?”

Post’s mother, Joyce Post, remembered Post’s experience in medical school was both exhilarating and one of his most challenging feats. She drew similarities in his determination to succeed in medical school to his boyhood struggle to overcome his disability.

While a patient at John Heinz rehabilitation center after his injury, an attendant there had ordered an electronic page turner so Jim could read books. He was disgusted, Joyce Post said.

“He said ‘I am not going to use that ridiculous thing,’” she said. “He said to the therapists, ‘and I’m going to teach myself how to write.’”

The attendant told him if he could learn to use a pen, she would return the device, Joyce said.

“He spent hours laying in that bed with the ballpoint pen in a splint. (Now) you can read his writing better than my writing,” she said.

Needless to say, the device was returned.

Despite his enthusiasm, the younger James Post still hit bottom, and in a moment of desperation, the 14-year-old asked his doctor whether he would ever walk again.

Post found hope in his doctor’s words, and eventually he resolved to work through his disability rather than wallow in bitterness.

Post married Saretha Wade, whom he met shortly after high school, and they have two children, Jimmy and Jessica. Last weekend they were traveling to visit colleges with Jimmy, who soon is to graduate high school.

Faith in God is paramount in Post’s life, and he shares the encouragement he finds in his daily prayers with his patients, he said.

“Even when things go bad, they look at it in a positive way, (my son and his family) always say that God has a reason for it,” she said.

Case in point: Post said he feels obliged to help others have hope, and credits the injury for the opportunity.

“Everybody has different types of difficulties. I feel like I have a responsibility to share my story and hopefully use it to inspire others,” Post said. “My injury has really opened my eyes to so many things. I don’t know if I would have as rich of a life. It’s all because I got hurt like that at age 14 … on that terrible day.”

Facebook
Twitter
Email
Mix
Digg
Previous article
Neuralstem spinal cord injury stem cell trial approved to commence at University Of California
Next article
It was a 16-foot fall, 16 years ago. She has soared much further.