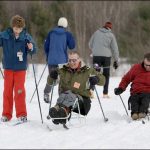 WILLISTON — It has been about a year since a spinal cord injury resulting from a snowboarding accident left Eric Rose in a wheelchair. His spine might have been damaged, but his determination is intact.

“Ironically, there’s too much snow,” Rose said after finishing his first loop around one of the trails. The deep snow made it harder to push himself forward as his poles sank in.

Rose and about 10 others took part in an adaptive cross-country skiing clinic, hitting the trails with the support of instructors, family members and volunteers. The clinic, the first of its kind in Vermont, was organized by the Northeast Disabled Athletic Association (NDAA) in collaboration with the Northeast Passage, a recreation and wellness program run by the University of New Hampshire for individuals with disabilities.

Rose said this is the first winter after his injury. He had already tried adaptive downhill skiing and now was trying cross-country. He joked that he had only fallen once during his first loop. It was a great day to be enjoying outside with his son David and wife Chris, he said. The family drove from Manchester for the clinic.

Carrie Guernsey, 33, of Williston, said she skied for the first time in her life Saturday. She participated in the clinic with her six-year-old son Jackson; both have leg problems, she said.

“He loves it,” she said referring to her child. “And he does much better than I do.”

Guernsey said she plans to continue cross-country sit-skiing and also wants to try adaptive downhill skiing. Winter sports give her a chance to enjoy the outdoors with her family, she said, something that is sometimes hard to do. She has also participated in other activities organized by NDAA, such as sled hockey, she said.

Based in Burlington, NDAA is a non-profit group that provides recreational and competitive athletic opportunities for people with physical disabilities. Incorporated in 2003, the organization offers sports such as hand cycling, sailing, wheelchair basketball, and sled hockey. NDAA founder and president Patrick Standen was out on the trails Saturday.

Standen has been in a wheelchair for 27 years and has practiced cross-country sit-ski for five, he said. The Burlington resident and St. Michael’s professor said he attributes his success in life to sports.

Cross-country sit-ski is a great aerobic sport and provides a good workout for the arms and the upper body, he said. The skills developed while practicing sports, including a willingness to work hard, are very useful for coping with the daily challenges faced by people with disabilities, he said.