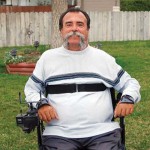 At age 24, Ed Costa Jr. had an ideal life with a great job, good health and good friends.

One spring day, during a two-week work furlough, Ed and his brother decided to head to the nearby Stanislaus River for some fun. Upon arriving, the brothers found the ideal sandbar and dove into the cool, refreshing waters. Splashing, kicking, swimming the brothers thoroughly enjoyed their day and made plans to return the following weekend.

Arriving to the exact same spot at the river the next weekend, Ed bet with his brother that he could beat him to the sandbar and took off running. Taking for granted that the body of water was the exact same depth as it had been the week before, Ed dove in head first and immediately everything went black.

Opening his eyes, Ed noticed the sand shifting beneath him as he floated down the river. He heard his brother’s voice in the distance telling him to quit horsing around. He continued to float away and it became clear to the younger brother that Ed was not faking and he rushed to rescue him.

Upon being pulled up to the sandbar Ed told his brother to get help. Returning with a couple of guys nearby and a 4-wheel drive Ed, unable to move, whispered his need for medical assistance thinking he may have broken his neck.

Shortly after the paramedics arrived, stabilizing Ed and alerting Med-Flight of the situation. The air ambulance landed right by the river and swiftly transported Ed to a local hospital and was placed in traction before being transferred to Santa Clara Medical Center.

There he was told that the body of water he dove into which was well over his head the week prior had receded to only 18-inches of water causing him to hit bottom immediately upon diving in, breaking his neck. The doctor explained to Ed and his parents that he had permanent damage due to breaking his 4th and 5th vertebrae and would be completely paralyzed from the chest down for the rest of his life. For the first 11 days Ed could do no more than blink as he lay in a rotating hospital bed, processing the life-altering diagnosis. During this time, Ed paid attention to how other patients were responding to the similar prognosis. Many of the patients expressed that if they could not walk again or could not recover from their permanent disability they would just rather die.

Living his life as a quadriplegic had been the farthest thing from the 24 year old’s mind when he went to the river that warm day in May. Nevertheless, it was to be his new reality and he had a choice to make. Would he curl up and prefer to die because life was unfair or would he accept his circumstance and choose to live?

While weighing the options, Ed thought about his young daughters from his first marriage who were only 2 and 5 at the time of the accident. He wanted to be there for them, to be the dad they needed him to be whether he was walking or paralyzed. He also thought about the accident itself, what took place, how it happened and finally concluded God had allowed him to survive for a reason.

Over the next four months while recovering in the hospital, Ed re-learned how to do basic things such as breathing and feeding himself. Things most of us take for granted. He also learned how to operate his new mode of transportation — his wheelchair. Initially, due to the complete loss of strength in his arms the nurses had to lift his hand and place it on the control knob showing him how to drive his chair. He would get rolling for awhile but whenever his hand would fall off the knob he would be stuck and have to wait for help. Needing help for every possible function was humbling but Ed chose to accept it instead of fighting against it. Eventually he built up the muscle tone in his arms and gained a measure of independence by being able to operate his wheelchair on his own.

Keeping a positive mind-frame as he learned to embrace the new life God had granted him, Ed quickly became a motivation to the other patients in the hospital. So much so, that when it came time for his release, members of the hospital staff requested that he come back often to share his testimony of hope in order to encourage the other patients.

Back at home, Ed’s mother, a care provider at St. Jude’s Hospital quit her job to take care of her son full time. As he adjusted to life on wheels, Ed began interacting with his friends more often and it was through this socializing that he met a beautiful, vibrant young woman named, Bridgett. The two hit it off right from the start and began dating. They were a perfect fit and before long they were married. Bringing together Ed’s two daughters, Bridgett’s son, and a daughter the couple had after they married to create a loving family of six.

Now at age 44, Ed reflects on the past 20 years and feels extremely blessed. Purposely choosing to focus on what is good, right, pure and true in his life, one day at a time, has given him the opportunity to not only enjoy a good and happy life with his family, friends and neighbors but to also be a shining light to others who may be going through life-changing challenges, proving that being bound to a chair doesn’t mean you have to be bound in life.

On the contrary choosing to maintain unshakeable faith and keeping a positive attitude has shown others that no matter what the circumstance they find themselves in, they can live and love their god-given life, even when life is on wheels.

By MONICA CANE
Special to the Bulletin