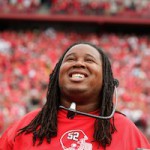 Eric LeGrand has never really been one of those people to just concentrate on his school work and go home. Even if school, after he suffered a severe spinal injury on the football field in 2010, is a bit more difficult for him than others.

Instead, LeGrand, who is set to graduate with a degree in business administration and labor relations from Rutgers in May, it’s just one of those things that he fits into a packed day that includes an intense rehab schedule, his broadcasting career, motivational speaking career and raising money to help victims of spinal cord injuries.

Finishing his credit requirements has been a huge relief, he said.

“I was at class in the morning and then therapy. And then another class after therapy or I would have to rush into a tutoring session,” he said. “But now I have more downtime in the evenings. I have time to work on my foundation, time to work on my motivational speaking career and see where it takes me.”

This month he is also working to form a team for the Wings for Life World Run, where groups in cities in 32 countries around the world will begin the run at the same time on May 4th. In Florida, where LeGrand will be, his team begins at 6 a.m. For the group in California, it will be 3 a.m.

His advice for getting out of bed that early in the morning is simple.

“It used to take me 10 minutes to get ready now it takes me two hours,” he said. “But it’s something you have to do sometimes.”

Forming a team for Wings for Life isn’t the only outreach LeGrand is doing. In addition to participating in events for the Christopher & Dana Reeve Foundation, LeGrand also has his own foundation, something he said he wanted to do to give back to a community that had helped him so much since he was injured. He received a $50,000 check from Pfizer Pharmaceuticals after he gave a speech to their company for a start.

The former Rutgers defensive tackle became an inspirational figure to the Rutgers community and around the world through his fight to recover from a severe spinal injury suffered against Army in 2010. He returned to the field to cheer on his team for games and later working in the broadcast booth. And in 2012, his former coach Greg Schiano, signed him to a contract with the Tampa Bay Buccaneers. LeGrand said the two still keep in touch.

“He has a lot more family time,” he said, “Which he hasn’t had because he’d been coaching for 26 years.”

He has also made remarkable progress since his injury, which initially left him paralyzed from the neck down. Videos posted on his Instagram account show him working to regain movement in his back. In one, he’s seen slowly moving his back muscles to sit up. Another video shows him working with a therapy dog, which helps him with his balance.

“The progress has been great so far,” he said. “I can’t complain. So many things have happened over these past three years.

“You know, slow but things are coming back.”

The new Gods of esports are paralyzed from the neck down