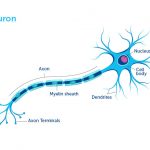 One of the reasons people rarely recover from spinal cord injury is the scar tissue that develops, preventing nerve cells from reconnecting. But a new study from Zhigang He, PhD, of the F.M. Kirby Neurobiology Center at Boston Children’s Hospital, demonstrated a way to minimize scar cell formation in adult mice after a spinal cord injury. The study, published in Nature, offers insights for new approaches to treating spinal cord injuries.

Scar tissue prevents nerves from communicating with each other.

Some animals, like fish and amphibians, easily heal a spinal cord injury without development of scar tissue. Instead, the axons of their nerve cells quickly regrow, re-establishing connections. Axons are the long fibers that extend from a nerve cell to connect with surrounding nerve cells.

However, this is not true in adult mammals. Axons do not regrow after spinal cord injury. Also, many types of harmful cells accumulate around the injury site further interfering with the axons ability to reconnect and transmit signals between nerve cells.

Specialized cells clean up after injury

In this paper, He found that microglia cells — a type of immune cell found in the brain and spinal cord that remove damaged nerve cells and infection— have an essential protective role in scar-free wound repair.

“Unexpectedly, we found that the injury in these young pups lead to scar-free healing that permitted the growth of axons through the site of the lesion,” says He.

When they studied a type of mouse that did not have normal numbers of microglia, they found that this scar-free healing did not occur, nor did axon regrowth.

“This means that the microglia have a critical role in orchestrating the injury response,” says He.

The team learned that microglia have at least two roles in scar-free healing. First, they help re-form bridges between the severed axon ends. Second, microglia cells from newborn mice — but not adult mice — produce a number of molecules that interfere with the action of certain harmful proteins.

“These protein inhibitors are involved in quickly tamping down the inflammatory response after spinal cord injury,” says He. “The microglia essentially orchestrated swift removal of harmful cell debris after injury and stopped inflammation.”

“Together, the findings point to potential strategies to facilitate scar-free healing after spinal cord injury.” – Zhigang He

“With these results we are convinced that microglia is a primary organizer for this scar-free wound healing,” says He.

A new path for spinal cord treatments and neurodegenerative disease

“Together, the findings point to potential strategies to facilitate scar-free healing after spinal cord injury,” says He.

The team is now testing several types of protein inhibitors to see which may be most effective in boosting the scar-free healing potential of microglia cells.

This discovery may also help understanding of treatments for neurodegeneration in general, such as in Alzheimer’s disease, ALS, and Parkinson’s disease

“One of the key players in these diseases is microglia,” says He. His laboratory is now studying the role dysfunctional microglia may have in the ongoing destructive nerve damage seen in these diseases. “Perhaps we can find a gene that might convert those chronically active microglia to treat neurodegeneration.”

Redevelopment Plans for Lower Manhattan to be Recognized for Accessibility