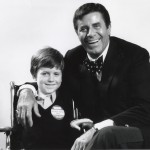 A young boy, facing overwhelming odds with little hope of success, turns to a Jedi Master and “the Force” for guidance, and eventually inspires the world. This isn’t just the science fiction of Star Wars, but the reality of an inspiring young man named Christopher Rush.

Christopher was diagnosed with muscular dystrophy at seven months, and his doctor told his parents that he “will be nothing more than a dishrag and will be dead by the age of two.” Despite the dire prognosis, as well as having to go through life as a quadriplegic, he was able to accomplish things most able-bodied people can only dream of.

As a huge fan of the Star Wars franchise, Christopher empathized with the protagonist, Luke Skywalker, who used the mystical power of the Force to achieve the impossible. Christopher wasn’t able to move his limbs, but with the power of his mind and sheer willpower, he was able to move mountains and inspire millions.

From 1983 to 1984, Christopher was a national ambassador for the Muscular Dystrophy Association (MDA), making him a recognizable face among “Jerry’s kids.” He visited President Reagan at the White House, was grand marshal of a Disney World parade, and became friends with many celebrities. Christopher threw out the first pitch at several Major League Baseball games and, in high school, was the first quadriplegic to become a licensed scuba diver in the United States. He graduated with honors from the University of Michigan, and eventually earned a law degree from Wayne State University. Perhaps most importantly, he created a program called GO FAR (Goals, Obstacles, Focus, Act, Review) devoted to helping people with disabilities, or anyone facing seemingly insurmountable obstacles, achieve their goals.

In 2007, Christopher finally succumbed to the disease at the age of 30. But his story doesn’t end there. One of his many friends, filmmaker Zack Arnold, wants to make sure his message of hope and optimism is not forgotten. Thus began a seven-year mission to bring Christopher’s story to the big screen.

Arnold, an award-winning film editor, named the film GO FAR: The Christopher Rush Story. Arnold explained, “Shortly before he passed, Christopher knew he had the opportunity to give back, so he used his own life experiences to develop the GO FAR program. Now, I have taken it upon myself to spread his message to those it can help the most. Why? Because knowing Christopher changed my life, and it’s the least I can do.”

Stars Wars inspired Christopher Rush, and it has also played a large part in the development of the film intended to honor him. Mark Hamill (aka Luke Skywalker) offered to narrate the film. Hamill explains, “When I was first approached about narrating GO FAR, I was not aware of the project. But after reading just a one-page pitch I agreed to do it because Christopher’s story was so inspiring. And after viewing the trailer, I even donated my fee because just being involved with such a powerful story is payment enough. I’m proud to serve as Christopher’s voice and help share his message.”

That positivity has enabled and shaped the entire project. As Arnold describes it, “Other elements of the production of the film came together magically, as if Christopher was weaving his plan from above. In fact, the entire film was financed on the goodwill of others through four successful Kickstarter campaigns.”

Released by Imagination Worldwide, the film will be available in stores and online later this year. The inspiring movie trailer is shown below.

Creating the film is only the first step. Arnold wants to take the movie to local chapters of disability organizations and children’s hospitals all over the country, as part of a grassroots campaign to help inspire others who face overwhelming challenges in their lives. The film will be screened for families and support groups, allowing auditoriums full of people to share their stories through in-depth discussions about the GO FAR method.

Arnold is committed to the project’s success. “I am 100% devoted to this effort. I want Christopher’s story and message to reach every person with disabilities, and their family members, across this country. Christopher believed that everyone has the potential to GO FAR, and so do I.”

To spread Christopher’s inspirational message, Arnold is seeking assistance. “My hope, now that we have the completed film, is to find an angel donor to help fund the coordination and traveling expenses for the grassroots campaign. We’ve come this far, and there is no giving up, only pushing forward, even if it takes another seven years.”

For more information on how you can support the GO FAR effort or screen the film for your organization contact Zack[at]gofarmovie.com. You can also donate via the website at www.gofarmovie.com.

Robert J. Szczerba is the CEO of X Tech Ventures and author of the Forbes column “Rocket Science Meets Brain Surgery.” Follow him via Twitter, Facebook, or LinkedIn.

Paraplegic not held back by tractor mishap