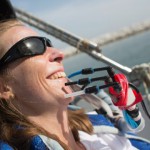 (CNN) — Hilary Lister had had the difficult conversation with her husband — a few times in fact. The quadriplegic had finally made the decision to end her life, had prepared to say goodbyes to Clifford and the rest of her family.

“It got to a point where I evaluated my life,” Lister told CNN. “I had to decide whether the space that I take up on the sofa [which unable to move she had done for hours and days on end] was still worth inhabiting.

“I came to the conclusion it wasn’t. I was at a very, very low point.

“I knew if and when my condition got any worse I would end my life. That was a decision myself and my husband were both aware of. You don’t make that decision on your own, you have to prepare yourself.”

It was to be a pre-ordained death with rules.

“Basically, I wouldn’t allow myself to take my tablets any more if I got much worse or got depressed or whatever,” Lister added.

“But I also set parameters to make sure that it wasn’t a spur of the moment thing. I have wonderful friends and family, who made sure they did everything to make sure my life was worth living.”

For all their collective positivity, though, nothing worked, until a friend lured Lister to an outing on the water at Westbere Sailing Club, her local club in southern England.

“It wouldn’t overstate it to say that sailing saved my life,” said Lister.

“It just gave me a little glimmer of thinking that space I was taking up on the sofa was worth inhabiting after all, particularly as someone had managed to get me off it to get on the water.

Since that Damascene conversion she has sailed single handed across the English Channel, circumnavigated Great Britain and most recently sailed the 1,500 kilometers across the Arabian Sea from Mumbai to Muscat, her first proper offshore expedition.

Lister suffers from reflex sympathetic dystrophy, a muscle wasting disease caused by a genetic blip that now prevents her from using her arms and legs.

With her sole movement in her head, Lister’s boat for that voyage — a 28-ft Dragonfly trimaran — was rigged up for her to sail it using innovative methods originally designed in the United States.

“I have three straws with which you register positive or negative pressure – so puff or suck,” she explains.

“That turns the winch one way or the other. The magic thing on the latest trip is that I was able to turn port and starboard in opposite directions at the same time thanks to reversible winches and thus fully tack the boat rather than doing it slowly, slowly bit by bit.”

The 41-year-old hasn’t always lacked mobility and it wasn’t until the age of 11 that she noticed there might be something awry.

It didn’t. By the age of 17, she had lost the use of her legs, though she refused to give up on her ambition to become a biochemist — an ambition she says she had from the age of three, which she achieved with a university degree followed by a PhD.

Working in a lab on her PhD she had to concentrate on not dropping things.

One day, though, three months of work and £12,000 worth of samples slipped out of her hands.

She never returned to the lab and a complex operation, which involved blood drained from her arms with an injection to stun painful nerve ends, did not work.

“Life isn’t always straightforward,” reflects Lister. “You just have to be grateful for what you have when you have it.”

For her, that is out on the water.

“It’s such a liberating place, it’s where you feel free. Once on the boat I can sail it as well as anyone really. I can forget about work or home life, anything in fact.

“You just think about the next wave and the next puff of wind coming. The wheelchair’s not there, I’m a sailor and it’s a huge feeling of freedom.

“But it’s more than that. It’s there that the pain dissipates. It doesn’t entirely go away, when you smack a wave, wow, I feel it. But it’s like an itch, if there’s something else, you forget about it.”

Despite her lack of movement, Lister still suffers from crippling pain thought to be caused by one particular fully functioning problematic nerve that sends a feeling of immense pain, heat or cold coursing through her veins.

It’s something that has to be treated with a daily diet of opiates and morphine, though the pain never properly vanishes.

It does not, however, stop her from planning new expeditions. There is one dream trip for Lister, who is sponsored by GAC Pindar, that hangs above all others.

“I want a longer crossing and I’m looking at something for next year.

“The dream would be to sail across the Atlantic — it’s something I’ve been thinking about and looking into for a long time. But we’re quite a way off from getting to that point.

“People talk about the dangers but I have a safety boat with me in case I capsize. There are dangers certainly but it’s about risk management. There are more people hurt riding horses each year than sailing.”

It is such dreams that give Lister hope as she sits back on her sofa thinking of a myriad of oceans still to explore.

By Matt Majendie, for CNN

Shooting for the STARZ