Art For The Able: How A Quadriplegic Filmmaker Created Change 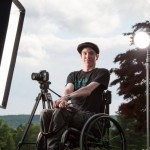 Ever since he was little, Jonathan Sigworth wanted to make movies. As a kid, he would make home movies with his LEGO pieces. Through high school, Sigworth and his friends made amateur horror films for fun. However, when the Connecticut teen went to study at a school in India located at the foot of the Himalayas, his own life turned into a horror movie.

While biking to class one February morning, Sigworth fell from a 70 ft. cliff. He landed very close to a hospital and some of its employees saw him in pain — which is possibly the only reason he survived. The accident crushed Sigworth’s spinal cord between the fifth and sixth cervical vertebrae, leaving him without feeling in his fingers and below his arms. Slowly, he learned to re-assemble his way of life.

After two years of recovery, Jonathan returned to India and realized that the care he received back in the United States was far more advanced than the support that those in India got. Then, he had an idea: what if he could use his experience as a quadriplegic to educate others and inspire people with disabilities around the world? For Sigworth, film was part of the answer.

“The thought of the documentary really came after we introduced [to Indian quadriplegics] wheelchair rugby,” Sigworth says. “I was trying to think of a way to promote the sport and the concept of active rehab. What kind of resource could we make that could spread that awareness and could be used as a tool for years to come? That’s what the documentary became.”

Jonathan is the director of More Than Walking, an award-winning 24-minute documentary short from 2009. In the doc, he shares his story of recovery with his peers in India, a country that receives far less support for citizens with disabilities than the United States or Canada.

At home, he could learn how to overcome the paralysis in his arms, hands and lower body. Over time, Sigworth mastered getting out of bed, swimming and writing, while he also began playing wheelchair rugby. In More Than Walking, Sigworth teaches several injured people how to regain muscle and ability, as well as become more self-dependent with these activities.

Sigworth made the film to help other injured people realize that they have the potential to do more and help others. “Giving back is so important in terms of recovery… because you life becomes drastically different after [your accident],” he says. “It’s not just difficult to overcome the challenges but to see the blessing in disguise.”

The filmmaker says his favourite part of making the doc was talking to people with disabilities. “We spent a lot of time sharing personal experiences before recording,” he says. “If I’m vulnerable, they will be vulnerable.”

However, making a film as a quadriplegic proved to be a challenge. Jonathan could not touch the camera during the three-month shoot. Meanwhile, he debated with his crew about the structure of the film. Was it focused on rugby, or was it more about inspiring those to see beyond their injury? “I didn’t know how all of the footage was going to fit together,” Jonathan says, adding that this disorganization led to an editing process that took close to a year.

However, the final product has proved to be a major work of disability advocacy. More Than Walking became an educational tool that has been translated into more than 20 languages and has won several awards. With the doc’s success, Sigworth has taken on a new role.

Sigworth is now the director of ESCIP Trust India (Empowering Spinal Cord Injured Persons), a non-profit that he runs with his family. He moved to Delhi, India last fall to coach a local wheelchair rugby team, as well as set up a transitional living home for quadriplegics and establish the ESCIP Trust.

His organization looks for ways to improve rehab practices to help people with spinal cord injuries in India, as well as teach those in recovery how to be peer mentors.

In the Delhi ESCIP House, a C5/6 quadriplegic who has gone through rehabilitation can train the other residents on how to live independently. This house is close to a rugby court, a park and the train. “It’s a great place for people to learn how to live on their own and feel like a normal, social being again,” he says.

Sigworth also says that in India, a lack of resources and family assistance makes it hard for many disabled people to support themselves. More Than Walking was made in memory of disabled persons who took their own lives because they lost hope.

Jonathan is still making movies and is now working on a Bollywood script that he hopes will be produced. As a student at Dartmouth College, he co-founded a film production club for classmates and wrote two scripts for student films. He co-wrote one of them, Hey Tolu, with Victor Lekweuwa, an exchange student from Nigeria.

That short film is about a college freshman from Nigeria and his relationship with his brother back home – who is disabled due to a bicycle accident. “[Victor] and I both have this experience of living in two different worlds and having this sense of responsibility to those other places,” Sigworth says.

Sigworth says he hopes his experience with More Than Walking helps to shape him into a storyteller with a unique perspective.

“That’s what interests me most about film… the way you can use it for enabling people to experience something from someone’s else point of view, and really immerse them in that idea.”