Newborns a hope for spinal injuries 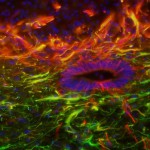 It all started at a symposium five years ago. Catherine Gorrie, an expert in spinal cord injury, was listening to a presentation about the differences between the developing brains of children and the mature ones of adults when she had an “aah-haa” moment.

“I began to wonder if there is something in the spines of children that could be manipulated for repair,” says Dr Gorrie, a neuroscientist at the University of Technology, Sydney (UTS). It made sense. Dr Gorrie already knew that the more adaptable, or “plastic”, spinal cords of infants responded more efficiently to injury than did those of adults.

If she could tease out the factors that encouraged generic cells, so-called stem cells, in the spines of newborns to become new nerve cells, neurones, Dr Gorrie reasoned that it should be possible to mimic the process and help repair spinal cord injuries in people of all ages. That would be incredibly important because, to date, there is no cure for spinal cord injury and no proven drug treatment.

“The most effective treatments available involve the surgical stabilisation of the spinal column and extensive physical therapy to provide some functional improvement,” Dr Gorrie says. “There is nothing else.”

In Australia, about 10,000 people live with spinal cord injury and 300-400 new cases emerge every year. Most injuries are a result of car accidents, sporting activities or severe falls.

Childhood spinal cord injury is frequently the result of tumours that compress the spine, crushing neurones which transmit signals to and from the brain.

As the notion of exploiting the biomechanical properties of infant spinal cords took shape in her mind, Dr Gorrie pulled together a team of UTS researchers: Dr Matt Padula, Dr Hui Chen and doctoral students Thomas Cawsey and Yilin Mao.

If Dr Gorrie’s team can work out how to encourage a type of stem cell already in the spinal cord to develop into neurones, they should be able to develop a treatment – one that can reduce the harm from new injuries or even reverse damage from long-standing ones – quickly and without invasive procedures.

That would be an important advance in the international quest for stem cell-based therapies for spinal cord injury. The reason is that most scientists work with other stem cells, for instance so-called mesenchymal stem cells. They must be collected from a patient’s bone marrow, cartilage or fat, then developed into neurones in the laboratory and returned to the patient to stimulate regeneration of spinal cord function. Such transplants would take place months or years after an injury.

According to Dr Gorrie, neural progenitor cells (NP cells) could sidestep that process. In the brain they develop into three types of cells: neurones, oligodendrocytes and astrocytes. Oligodendrocytes support and insulate the long projections of neurones called axons. And astrocytes play a role in the repair and scaring process after traumatic injury.

The goal of Dr Gorrie’s team’s is to slow the activity of spinal cord astrocytes immediately after injury while simultaneously encouraging the formation of oligodendrocytes and also new neurons – a process not known to occur in the spinal cord after birth.

It is early days, but the team is already making progress in experiments with animals and tissue culture.

“We are getting increased reaction of the NP cells to an injury,” Dr Gorrie says. “The response happens very quickly after injury, within 24 hours,” she says, adding that the team can spot the response by identifying a “marker” of NP cell activity called nestin, a type of protein.

Other international groups also work with NP cells but Dr Gorrie’s “little team that could” is the first to focus on NP cells from young and old animals and to begin nailing down the timing of post-injury cell activity.

But there is a stumbling block – funding. Dr Gorrie’s UTS Early Career grant concluded last year. “If there’s anybody out there with a spare $10,000 to $20,000, give me a call,” laughs Dr Gorrie. She’s not kidding.

This story written and produced by the University of Technology, Sydney, for Brink, a publication distributed monthly in The Sydney Morning Herald.