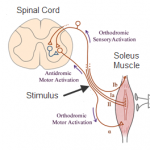 Initial human studies of the H-Reflex Device have shown significant improvements in locomotion in spinal cord-injured (SCI) patients. Presented here is the use of a device and protocol to improve locomotor function in people with SCI by down-conditioning hyperactive reflexes or, if appropriate, up-conditioning hypoactive reflexes. Using operant conditioning of spinal reflexes, we can target plasticity to specific reflex pathways, which results in significant improvements in walking performance. These include less spasticity, easier stepping, increased walking speed, improved gait symmetry and decreased dependence on assistive devices.

The device consists of hardware and software that can administer the protocols in a patient’s home without the direct involvement of an expert. The hardware consists of a nerve stimulation-EMG (electromyographic) recording (NS-EMG) component that can be mounted at a given place on the body (e.g., calf and knee) and a programmable controller with monitor that communicate via telemetry. The H-Reflex Device modifies specific nervous system pathways through use of an operant conditioning protocol. Detailed studies in laboratory animals have revealed the anatomical and physiological nature of these spinal cord changes.

Current neurological rehabilitation methods consist primarily of the repeated practice of motor and cognitive skills (i.e. treadmill locomotion, reach and grasp actions, etc.). Although this strategy is logical and often beneficial, it is seldom fully effective. These skills depend on plasticity (i.e., changes) throughout the CNS from the cortex to the spinal cord. By providing the ability to target change to specific reflex pathways, reflex conditioning methods can guide plasticity to achieve widespread effects on the complex nervous system networks that produce neuromuscular skills, and thereby improve these skills beyond the levels possible with conventional practice.

The spinal stretch reflex (SSR), also called the tendon jerk reflex or M1, is the initial response to sudden muscle stretch; this reflex excites the muscle that opposes the sudden stretch. The electrical analog of the SSR, the H(i.e., Hoffman)-reflex, is elicited by weak electrical stimulation of the peripheral nerve, rather than by muscle stretch. Both the SSR and H-reflex are produced mainly by a two-neuron, monosynaptic pathway that synapses in the spinal cord.

People with incomplete spinal cord injury (SCI) frequently suffer motor disabilities due to spasticity and poor muscle control, even after conventional therapy. Abnormal spinal reflex activity often contributes to these problems. In people with SCI, modulation of the soleus H-reflex across the step cycle is absent or diminished greatly and the abnormality affects locomotor EMG activity, contributing to spasticity (e.g., clonus), foot drop and other disabling problems. Because they can target particular spinal pathways by either weakening or strengthening the activity of these pathways, reflex-conditioning protocols can be designed to focus on each individual’s particular deficits.