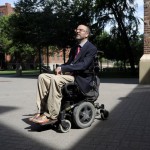 ST. CLOUD, Minn. — Pensacola, Fla., is more than 1,100 miles from St. John’s University in Collegeville, Minn., but Robert Bell found himself feeling right at home as soon as he visited the Minnesota campus.

The university turned out to be the site of a life-changing event: While an undergraduate student, Bell was accidentally paralyzed while roughhousing with another young man.

Bell became the third St. John’s student to graduate in a wheelchair. Career and law school took him away from central Minnesota, but the quadriplegic has since returned to teach in the accounting and finance department at the College of St. Benedict/St. John’s University.

Soon he will be talking to a national audience about his book, a collection of stories and tips for dealing with life’s challenges. He will appear on MSNBC’s “Morning Joe” on Monday to promote his book; host Joe Scarborough was Bell’s junior varsity football coach in high school.

A 44-year-old “son of the South” who loves soul food, Bell said he fell in love with the university, staff and faculty after touring the campus.

“My mom and I drove up to visit it,” he said. “I had never seen snow in my life. I had never owned a real jacket or pair of gloves … but the women I interviewed with was so nice, everybody was so nice to me — my first exposure to ‘Minnesota nice.'”

He decided to study at St. John’s despite some initial hesitations and being from the South.

“I got in the car after the interview and said to my mom, ‘This is where I’m going to school,’ ” Bell said. 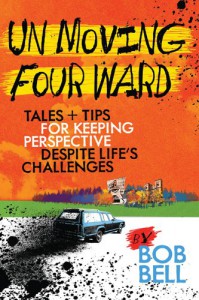 He was paralyzed at St. John’s two days before Thanksgiving break in a dormitory wrestling incident

“The funny thing is that I was about to be kicked out because I had basically broken about every rule they had in maybe three months when a student put me in a full nelson wrestling hold; it was basically horseplay,” he said.

Bell, 44, has used an electric wheelchair since the accident about two decades ago.

He writes in detail about the life-changing — and life-affirming — accident in his book, “Un Moving Four Ward: Tales + Tips for Keeping Perspective Despite Life’s Challenges,” which was released earlier this year.

Bell spent about two months in intensive care at St. Cloud Hospital. He then flew home via air ambulance to Pensacola and spent more than a year recuperating before returning to graduate from St. John’s in 1994.

“My goal was to return to St. John’s to graduate, to finish what I had started, and so I was gone for a period of time, and then came back and only graduated one year later than I should have,” Bell said.

“It’s a place I believe in deeply. I think how they transform the lives of students is special. I feel that they did that for me, and I feel honored to be a part of it — now doing it as a professor.”

Getting a kick out of research

Use your mind, keep body safe