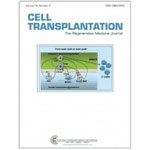 Putnam Valley, NY. (Sept. 3, 2014) – A team of researchers from Korea and Canada have found that transplantation of B10 cells (a stable immortalized human bone marrow derived –mesenchymal stem cell line; B10 hMSC) directly into the bladder wall of mice modeled with spinal cord injury (SCI) helped inhibit the development of bladder fibrosis and improved bladder function by promoting the growth of smooth muscle cells in the bladder.

The study will be published in a future issue of Cell Transplantation and is currently freely available on-line as an unedited early e-pub at: http://www.ingentaconnect.com/content/cog/ct/pre-prints/content-CT-1227_Lee.

Spinal cord injury (SCI) can cause severe lower urinary tract dysfunction and conditions such as overactive bladder, urinary retention and increased bladder thickness and fibrosis. HMSCs, multipotent cells that can differentiate into a variety of cell types, including bone cells, cartilage cells, and fat cells, have been transplanted into injured spinal cords to help patients regain motor function.

In this study, mice receiving the B10 hMSCs injected directly into the bladder wall experienced improved bladder function while an untreated control group did not.

“Human MSCs can secrete growth factors,” said study co-author Seung U. Kim of the Division of Neurology at the University of British Columbia Hospital, Vancouver, Canada. “In a previous study, we showed that B 10 cells secrete various growth factors including hepatocyte growth factor (HGF) and that HGF inhibits collagen deposits in bladder outlet obstructions in rats more than hMSCs alone. In this study, the SCI control group that did not receive B10 cells showed degenerated spinal neurons and did not recover. The B10-injected group appeared to have regenerated bladder smooth muscle cells.”

Four weeks after the onset of SCI, the treatment group received the B10 cells transplanted directly into the bladder wall. To track the transplanted B10 cells via magnetic resonance imaging (MRI), the researchers labeled them with fluorescent magnetic particles.

“HGF plays an essential role in tissue regeneration and angiogenesis and acts as a potent antifibrotic agent,” explained Kim.

The researchers concluded that local injection, rather than systemic intravenous injection, was preferred because systemic injection caused the hMSCs to be localized in the pulmonary capillary bed.

Voiding function was assessed at four weeks post-transplantation and MRI “showed clear hypointense signal induced by the labeled cells”. When the bladders of the transplanted group were harvested they were found to have improved smooth muscle cells and reduced collagen deposition.

The researchers concluded that MSC-based cell transplantation may be a novel therapeutic strategy for bladder dysfunction in patients with SCI.

“This study provides potential evidence that an human stable immortalized MSC line could be useful in the treatment of spinal cord injury-related problems such as bladder dysfunction.” said Dr. David Eve, associate editor of Cell Transplantation and Instructor at the Center of Excellence for Aging & Brain Repair at the University of South Florida. “Further studies to elucidate the mechanisms of action and the long term effects of the cells, as well as confirm the optimal route of administration, will help to illuminate what the true benefit of these cells could be.”