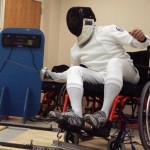 They came in wheels, with dogs and on foot to see dancers, sword-fighters and experts.

“This has really been good,” McMahon, RN, CRRN, MSA, board member, the Greater Kansas City Spinal Cord Injury Association. “I’m so pleased. I think we’ve just had great interaction with people in the community.”

McMahon was one of six founders to launch the local Spinal Cord Injury chapter several years ago. She has worked with patients with spinal cord injuries for more than a decade at the University of Kansas Spinal Cord Program and saw a need to bring local resources, services and peer support to individuals with spinal cord injury, their families and professionals in the field. From the start of the organization, she had an expo in mind.

“It was my dream,” she said. “We just have not had a expo in Kansas City. It was the thing I wanted to do most.”

“This one is exceptional,” said Bonnie Hilburn, quality assurance manager, Paralyzed Veterans of America (PVA). “This one is for everybody — spinal cord people, advocates, medical suppliers.”

Hilburn has advocated for veterans with spinal injuries for 25 years, navigating them through wheelchair options, adaptive housing and securing benefits. Hilburn got the word out at her exhibit at the expo.

“Let people know who PVA is,” she said. “We’re letting them know about research and development.”

Canine Companions for Independence demonstrated the usefulness of service dogs.

“I’m glad they had it here,” Kevin Beach, of Lenexa, Kan., said. “It (fencing) has a lot of movement and blade work.”

Beach, a former athlete, said he shoots a lot of pool. He was willing to try his hand at fencing, but said he would leave dancing to others.

Another Greater Kansas City Spinal Cord Injury Association founder and board member, Adam Lane said he was thrilled with the traffic at their first annual event.

“It really felt like what I wanted to accomplish,” he said. “That’s our whole goal.”

She spoke with representatives from a home renovation company.

“I need a shower that is accessible for me,” she said. “That would be awesome.”

Cannon, 19, said she became an incomplete quadriplegic after a car accident two years ago. She travels by wheelchair, but has some use of her arms and hands. She is proud she can wiggle her toes and feel the wind on her legs, she said.

“Yeah, it sucks that I’m in a chair,” Cannon said. “But life goes on. I’m still the same old Maddy.”

Cannon said she wanted to solve the problem of people of staring at her in a wheelchair.

She needed an ice breaker. One night she told her best friend she planned to bedazzle people with her chair. Then they spent hours gluing rhinestones on the machine’s frame.

“I know they’re going to stare,” she said. “I might as well give them something to stare at.”

UCLA scientist gives couple hope while searching for a cure for...