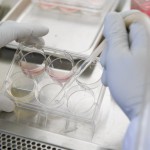 It’s one of the latest efforts to remake tissue in the lab. The discovery could lead to more research into human development and disease progression.

Neuro-mesodermal progenitors (NMPs) — the particular cells that form the spinal cord, muscle and skeleton — begin their transformation once given the go-ahead by certain chemical signals in the body.

Scientists had previously had success creating nerve, muscle and bone cells from stem cells, but with their new efforts, they created the specialized cells from NMPs instead of stem cells. It’s a more “intermediate” step in the process because they skip over traditional cell-making. This makes the new cells more like the naturally occurring nerve, muscle and bone cells in the body.

The researchers had to cajole mouse and human stem cells into becoming NMPs before they became spinal cord cells, a discovery they called a “breakthrough.”

“We can’t yet produce the tissues themselves, but this is a really big step,” said Dr. James Briscoe, one of the study leaders at the MRC National Institute for Medical Research at the University of Edinburgh in Scotland. “It’s like being able to make the bricks and raw materials but not yet build the house.”

Even though NMPs have been known about for over 100 years, they “have been largely overlooked,” he added, “like Cinderella cells.”

“We hope this work will bring them out of obscurity and highlight their importance.”

The research was published in the journal PLOS Biology.