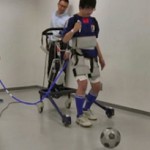 Spinal cord injuries that result in paraplegia may one day be treatable using a technique that bypasses the damaged neural pathways that connect the brain to the spinal locomotor center. The researchers, from the National Institute for Physiological Sciences in Japan, have demonstrated how the computer-controlled bypass circuit allowed a subject to use hand movements to initiate walking.

The technique, detailed in The Journal of Neuroscience, allows subjects to stimulate the spinal locomotion center using volitionally-controlled muscle activity – in this case, rhythmic hand movements. This upper limb muscle activity was converted to magnetic stimulii delivered non-invasively over the lumbar vertebra. The subjects were able to initiate and terminate walking-like behavior and to control the step cycle solely via their arm activity. The researchers say the kinematics of the induced gait were identical to those observed in voluntary walking.

“We hope that this technology would compensate for the interrupted pathways’ function by sending an intentionally encoded command to the preserved spinal locomotor center and regain volitionally-controlled walking in individuals with paraplegia,” added co-researcher Yukio Nishimura. “However, the major challenge that this technology does not help them to dodge obstacles and to maintain posture. We are carefully working toward clinical application in near future.”