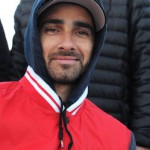 Second chances are rare in sports, but when surfing phenom Jesse Billauer got his, he also wanted to share it with others like him.

As a 17-year-old amateur surfer in 1996, Billauer was flung head first from his surfboard onto a sandbar. Billauer sustained a spinal cord injury, and doctors diagnosed him as a quadriplegic, paralyzed from the midchest down.

Then in 1999, with the help of his family and friends, he founded a non-profit organization, Life Rolls On, that uses sports to improve quality of life for those suffering from spinal cord injuries. That same year Billauer got back on his surfboard. That led to the creation of Life Rolls On’s signature program, They Will Surf Again, inspired by Billauer’s determination to ride the waves once more despite his paralysis.

“What that means is just get them on the waves and skateparks and just having that freedom and independence of having the wind and the water on their face and just getting out of their wheelchairs,” Billauer told ThePostGame. “Whether it be surfing or skating, they’re just doing new things — just a whole different sensation and just a beautiful feeling.”

They Will Surf Again is now in 10 locations, with New York and Nova Scotia being recent additions, hosting 60 to 100 adaptive athletes and 300 to 400 volunteers in every spot, Billauer said.

When he first got back in the water in 1999, he could hardly lift his head off the board. After time and hard work Billauer was propping himself up on the surfboard with his hands and arms, and surfing in a new and profound way.

Here’s Billauer shredding some great waves with friends in Honolulu:

After seeing Billauer’s belly-down style in an exhibition surf session at the 2003 U.S. Open of Surfing, the public address announcer said, “Next time you’re having a bad day just remember what you’re seeing out here.”

That inspiration grew Life Rolls On into a national movement as it branched into other action sports with They Will Skate Again and They Will Ski Again programs.

Part of the goal is bringing communities closer together, and with the right people involved, Billauer believes Life Rolls On will continue to grow.

“It feels like a nice family get-together,” Billauer said of Life Rolls On events. “Everybody’s there to help.”

“Hawaii Five-0” star Scott Caan and singer Jason Mraz have been among the volunteers.

The group’s biggest fundraiser, Night by the Ocean Gala, is in its 10th year, and will be held at the Marriott in Marina del Rey on Oct. 11.

His ‘Charmed Life’ Offers Ammunition for a Cure