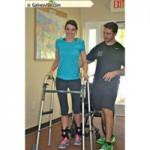 Three years ago, Cara Moro was given the devastating news: She would never walk again.

While performing a cheerleading stunt on Sept. 3, 2011, the 19-year-old Santa Fe College student and cheerleader broke her back at the T11 vertabrae in the lower back. She damaged her spinal cord and was paralyzed from the waist down.

But thanks to her determination and specialized exercise-based therapy, Moro is able to walk today.

The story of how she regained her mobility began with surgery and six days of recovery at UF Health Shands Hospital. She then was admitted to Shepherd Center, a hospital in Atlanta that is dedicated to spinal cord injury research and rehabilitation, where she received six weeks of occupational therapy.

At Shepherd Center, Moro learned more about her condition and how to adjust to life in a wheelchair. She remembers everyone telling her walking again was not a viable option, but Moro said she did not accept the diagnosis.

Then, a family friend told her about the Project Walk Institute of Spinal Cord Injury Recovery. The institute, regarded as a leader in paralysis recovery, prescribes for its clients specific exercises to re-establish patterned neural activity in the central nervous system. Clients, with assistance from trained specialists, then replicate the movement patterns.

The unconventional approach appealed to Moro. Fortunately for her, a Project Walk center had opened in Orlando two years prior less than 10 miles from her home.

Liza Riedel opened the center after her daughter, Amanda, was paralyzed in a car accident. Just as Moro rejected the discouraging opinion of doctors, Riedel and her daughter also sought alternatives.

“They wanted to teach her how to live well in a wheelchair,” said Riedel. “We didn’t want that, we wanted to get rid of the wheelchair.”

Riedel flew Amanda back and forth from Project Walk’s headquarters in Carlsbad, California, until she decided a center in the Southeast was long overdue. She is now

“We help them actually recover function of their body,” Richard said.

Richard, who has a bachelor’s degree in kinesiology from Texas Woman’s University, believes every client has a certain level of underlying function that traditional therapies often don’t utilize.

“If you never enter into a program like ours,” Richard said, “you’ll never know what your potential is.”

Although several patients from Project Walk Orlando have regained the ability to walk, it doesn’t come easy.

“You have to want to be here and want to work hard,” said Riedel.

Richard credits Moro’s accelerated recovery to her hard work and perseverance. In his years working with Moro, he said she’s never even been late to a session.

Now 22 and studying at Valencia College with plans to transfer to the University of Central Florida, Moro draws motivation from both her family at home and the family she has become a part of at Project Walk Orlando.

Moro lives on her own with her boyfriend, Aaron Teel, who she also met at Project Walk. She drives a car that has hand controls instead of the customary steering wheel.

When she’s at home, she walks with her walker twice a day to practice and build up her endurance.

Despite what doctors told her was impossible, Moro steps away from her wheelchair daily and hopes to be walking without a walker in the near future. She hopes others in her position don’t limit themselves and find hope, despite restricting circumstances.

“Don’t just sit back and let people tell you the things you can and can’t do,” Moro said.