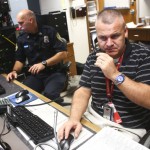 TAMPA — Troy Webb rolled his wheelchair back from a wall of screens showing the busy hallways of the James A. Haley VA Medical Center. He can see into a million square feet of the center through more than 100 cameras from his work space, a room the size of an average bedroom.

He picked up a ringing phone. A Mercedes was involved in an accident in the parking garage. It was turning out to be a quiet morning, but more than 10,000 people would filter through the center by the end of the day.

“It will be just like this and then someone starts yelling; someone hits the panic alarm and it goes crazy,” Webb said. The Veterans Affairs police officers flow through the room regularly, and sometimes use an evidence locker and a small holding cell to control suspects.

Webb, 37, is one of 280 participants in a national five-year program that started in 2010 to help veterans with spinal cord injuries get jobs. In June, he was hired as a dispatcher for the medical center’s police, his first job in 15 years.

He says it gives him a sense of purpose and structure to his day.

“There’s a lot of research about the positive effects of employment,” said Lisa Ottomanelli, a clinical psychologist and the lead researcher for the program. She coordinates the program at seven spinal cord injury centers throughout the country from Tampa. Integrating vocational services alongside health care is key, she said. So far, about 40 percent of participants in the program have started working.

The supported employment model she uses has worked for veterans with mental illness, including post-traumatic stress disorder, Ottomanelli said. Her program is the first to apply the same model to people with physical disabilities.

Rachel Ahumada, an employment specialist, works closely with 18 participants who live near Haley, including Webb. Working with their medical treatment teams, she says, allows her to be proactive about employers’ concerns.

“I really get to know these vets and their preferences and strengths,” Ahumada said.

She has placed one worker at a deli counter and another in customer service at a football stadium. One is teaching crochet at a fabric store; another is teaching at a community college.

Webb told her about his background working with weapons and safety principles.

“I knew this job would work for him,” Ahumada said. “He’s getting rave reviews from his boss.”

Webb had always wanted to join the Marines and signed up in high school, leaving for boot camp on Parris Island in 1994 when he was 17. He studied explosives and doled out ammunition in Hawaii and Japan. In 1998, he returned home and started working at his father’s roofing company. One morning, on an old roof in Dunedin, he stepped on a broken tile and his feet slid out from under him. “It happened in a blink,” he said.

He landed on a shovel and broke his back. He was 22.

Living with chronic pain, he became hooked on pain medication. It garbled his mind, he said, and eventually he stopped working. Getting off the Percocet took a year, he said, and was the hardest thing he ever did.

Now he relies on pain patches. He has some feeling in his legs and can move them to stand up and walk short distances. He has the strength, but not the balance … “yet,” he says.

When he’s out, people often come up to his chair to thank him for his service. He always tells them that his injury was not from combat.

“They say it doesn’t matter; you’re a veteran,” he said. “But I want to set the record straight.”

In November, he got married. He looks forward to having dinner with Grace, his bride, every day. He tells her stories of his day, like the FBI agents who came in recently to study the cameras, looking for someone.

She says he seems happier now that he has a job.

Then she wants to bring similar services to veterans in rural communities by telephone.