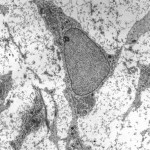 Stem cells hold great promise as a means of repairing cells in conditions such as multiple sclerosis, stroke or injuries of the spinal cord because they have the ability to develop into almost any cell type. Now, new research shows that stem cell therapy can also work through a mechanism other than cell replacement.

In a study published today in Molecular Cell, a team of researchers led by the University of Cambridge has shown that stem cells “communicate” with cells by transferring molecules via fluid filled bags called vesicles, helping other cells to modify the damaging immune response around them.

Although scientists have speculated that stem cells might act rather like drugs – in sensing signals, moving to specific areas of the body and executing complex reactions – this is the first time that a molecular mechanism for this process has been demonstrated. By understanding this process better, researchers can identify ways of maximising the efficiency of stem-cell-based therapies.

Dr Stefano Pluchino from the Wellcome Trust-Medical Research Council Cambridge Stem Cell Institute, who led the study, said: “These tiny vesicles in stem cells contain molecules like proteins and nucleic acids that stimulate the target cells and help them to survive – they act like mini “first aid kits”.

“Essentially, they mirror how the stem cells respond to an inflammatory environment like that seen during complex neural injuries and diseases, and they pass this ability on to the target cells. We think this helps injured brain cells to repair themselves.”

Mice with damage to brain cells – such as the damage seen in multiple sclerosis – show a remarkable level of recovery when neural stem/precursor cells (NPCs) are injected into their circulatory system. It has been suggested that this happens because the NPCs discharge molecules that regulate the immune system and that ultimately reduce tissue damage or enhance tissue repair.

The team of researchers from the UK, Australia, Italy, China and Spain has now shown that NPCs make vesicles when they are in the vicinity of an immune response, and especially in response to a small protein, or cytokine, called Interferon-gamma which is released by immune cells. This protein has the ability to regulate both the immune responses and intrinsic brain repair programmes and can alter the function of cells by regulating the activity of scores of genes.

Their results show that a highly specific pathway of gene activation is triggered in NPCs by IFN-gamma, and that this protein also binds to a receptor on the surface of vesicles. When the vesicles are released by the NPCs, they adhere and are taken up by target cells. Not only does the target cell receive proteins and nucleic acids that can help them self-repair, but it also receives the IFN-gamma on the surface of the vesicles, which activates genes within the target cells.

The researchers, who were funded by the European Research Council and the Italian MS Society, used electron microscopy and superresolution imaging to visualise the vesicles moving between the NPCs and target cells in vitro.

“Our work highlights a surprising novel role for stem-cell-derived vesicles in propagating responses to the environment,” added Pluchino. “It represents a significant advance in understanding the many levels of interaction between stem cells and the immune system, and a new molecular mechanism to explain how stem-cell therapy works.”