Adventurer Mark Pollock: The Mark of a real man 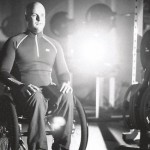 ON the evening of November 12, in 30 cities, including Dublin, Cork, Belfast, London and Manchester, runners wearing flashing red armbands will raise money for a condition that currently has no cure.

The background to Run In The Dark is the unfinished story of an astonishingly determined individual, Mark Pollock, who, with his girlfriend, is also the subject of a film, Unbreakable, directed by Ross Whitaker.

You’ve probably heard of Pollock. He’s the Co Down adventure athlete who was the first blind person to race to the South Pole. After losing his sight — due to a detached retina — in 1998, when he was 22, he was “catapulted back to his bedroom” from his busy life of sport and studies. He was, he said, “heavy under the weight of biases of what blind people can and can’t do”.

Pollock decided that blindness would not push him off course from his ultra-active and adventurous path.

Within a decade of losing his sight, he had completed six marathons in seven days in the Gobi desert, won medals at the Commonwealth Games, completed Ironman events, and, most extraordinarily, was part of a team race to the South Pole.

In 2010, feeling fantastically confident after his Antarctic adventure and four weeks before he was due to marry Simone George, Pollock fell from a second-storey window onto concrete and damaged his spinal cord.

He was paralysed, and spent 16 months in hospital. In a TED talk in California, this summer, he summed things up: “Ladies and gentlemen, I’ve got problems. I’m paralysed, I’m blind, I’m bald.” He said this matter of factly, with a twinkle in his voice, if not his eye (see link to TED talk below).

Instead of crumbling under the double burden of blindness and paralysis, Pollock confronted his spinal-cord injury with characteristic grit and resolve, and with the help of new technology.

Working with neuroscientists from UCLA, the Pavlov Institute, in St Petersburg, and the Frazier Rehab Institute, in Kentucky, he is now the world’s principal test pilot for Esko Robotic Legs. He is the leading guinea pig for cutting-edge research that uses robotic implants and attachments to communicate messages to the brain that were formerly transmitted by the now-damaged spinal cord.

Pollock speaks excitedly of neuromodulation, of being fitted with robotic legs in 2012, and the impact of the emerging technology on the secondary aspects of spinal-cord injury. These aspects involve bladder, bowel and sexual function. “It’s not just your legs that don’t work,” he tells me.

“It’s much more undignified than that. You could build a robot to help with standing and walking, but that wouldn’t deal with the secondaries.”

He is still in a wheelchair, despite four years of work, including taking 300,000 steps over a two-year period, every single one recorded by his robotic legs and sent in real time for analysis at the San Francisco workshop.

He is neither deluded nor defeated about the reality of his injury.

“There is no cure for spinal-cord injury,” he says. “So I have acceptance, on one hand, and hope, on the other. Acceptance that the likelihood of getting out of this wheelchair is almost zero, but hope that the robotics and electrical stimulation of the spine give us enough data to proceed with the research. Christopher Reeve put paralysis on the agenda, but when he died, ten years ago, the research stalled. It’s really important to communicate the reality of spinal injury — 75% of Irish people with it do not get back to work.

“There is no cure, but very exciting research — it’s not available to those currently coming out of hospital, but from the perspective of hope, it’s tremendously exciting.”

Thanks to Pollock’s amazing story — his refusal to give up in the face of such unimaginably daunting physical challenges — spinal-cord injury and paralysis have a face and a voice. He lives, he says, in “the domain of unpredictable problems.”

Unbreakable is an intimate portrait of Mark and Simone’s problems day by day, and how they stay united and focused; it’s about the strength of human relationships, and the strength of individuals. It is about the very best aspects of humanity. Go see it.

Join in Run In The Dark — every penny of your entry fee goes to research on finding a cure for spinal-cord injury. And imagine a future where, thanks to the dedication and ingenuity of scientists and the sheer guts of people like Mark Pollock, spinal-cord paralysis may no longer exist.