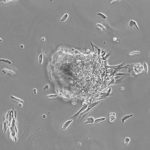 Newswise — Researchers at the University of Pennsylvania School of Medicine have isolated a new source of adult stem cells that appear to have the potential to differentiate into several cell types. If their approach to growing these cells can be scaled up and proves to be safe and effective in animal and human studies, it could one day provide the tissue needed by an individual for treating a host of disorders, including Peripheral nerve disease, Parkinson’s disease, and spinal cord injury.

“We are very excited about this new source of adult stem cells that has the potential for a variety of applications,” says senior author Xiaowei (George) Xu, MD, PhD, Assistant Professor of Pathology. “A number of reports have pointed to the fact that adult stem cells may be more flexible in what they become than previously thought, so we decided to look in the hair follicle bulge, a niche for these cells.” Xu and colleagues report their findings in the latest issue of the American Journal of Pathology.

The differentiated cells acquired lineage-specific markers and demonstrated appropriate functions in tissue culture, according to each cell type. For example, after 14 days, 20% to 40% of the cells in the melanocyte media took on a weblike shape typical of melanocytes. The new cells also expressed biomarkers typical of pigment cells and when placed in an artificial human skin construct, produced melanin and responded to chemical cues from normal epidermis skin cells.

After 14 days, about 10% of the stem cells in the neuronal cell line — a type of cell not present in skin or hair — grew dendrites, the long extensions typical of nerve cells and expressed neuronal proteins. The Neurotransmitter glutamate was also present in the cells, but the neurotransmitter dopamine was not detected.

Thirdly, about 80% of the stem cells grown in the muscle media differentiated into smooth muscle cells. These new muscle cells also contracted when placed in a collagen matrix.

Overall, the researchers showed that human embryonic stem cell media could be used to isolate and expand a novel population of multipotent adult stem cells from human hair follicles. “Although we are just at the start of this research, our findings suggest that human hair follicles may provide an accessible, individualized source of stem cells,” says Xu. The researchers are now working on inducing other cell types from the hair sphere cells and testing the cells in animal models.

This release and a related image can also be seen at: http://www.uphs.upenn.edu/news/.

Penn’s School of Medicine is ranked #2 in the nation for receipt of NIH research funds; and ranked #3 in the nation in U.S. News & World Report’s most recent ranking of top research-oriented medical schools. Supporting 1,400 fulltime faculty and 700 students, the School of Medicine is recognized worldwide for its superior education and training of the next generation of physician-scientists and leaders of academic medicine.