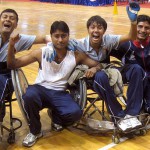 Their disability is not a barrier to their passion for sports. But it seems quadriplegics are not getting wide support from society and government.

“We are quadriplegic, we play wheelchair rugby. But the Paralympic Committee of India denied affiliation to quadriplegics to take part in the next international rugby event in South Korea starting from October 20,” said Jonathan a US national, who runs a non-profit trust Empowering Spinal Cord Injured Persons (ESCIP) in Delhi.

Jonathan suffered spinal cord injury when he met an accident in a hill station during his study tour in India. After coming out of hospital, Jonathan decided to impart transitional training to other similar patient and in 2008 he founded ESCIP with is base in Kailash Colony.

Jonathan said: “Wheelchair Rugby was introduced to India by ESCIP in 2008 and has served as a catalyst for independent living and peer support among the spinal cord injured community in Delhi.”

“For a person suddenly immobilised, bound to a wheelchair to see that they can experience the community of a team, travel to tournaments, and participate in a paralympic sport – that is affectionately called “Murder ball” – is great,” said Pawan Sharma, 30, a quadriplegic who is learning transitional skills at the ESCIP trust.

Sharma suffered spinal cord injury in 2007 while going to college in an auto rickshaw which met an accident.

Years later when he came in contact with ESCIP trust he started playing rugby. Sharma admits that before his accident he watched sport on TV.

“Until I met Jonathan, I felt like a handicapped person but now I am a rugby player,” said Sharma.

Talking about not being allowed to go to South Korea, Sharma said: “Our society and state are just not compassionate towards differently abled citizens. Whether walking into the park or traveling in the bus it seems the city is little reluctant in accepting us,” he said.

There are others like Sharma who have overcome their disability through sports but feel let down by the system.

“I wanted to be a sportsman but after my accident had lost home. Now playing wheelchair rugby has given me a chance to live my dream,” said Gajendra Negi, 30, a resident of Uttarakhand.

“I am sad that PCI is not allowing us to play the international tournament,” said Negi, who is interning at the ESCIP.

ESCIP provides transportation for weekly practice sessions for those participants in need, and incorporates wheelchair skill training, social gatherings and rugby games for over a dozen quadriplegics.

Visit their Advocate! page to donate, and watch this recent news clip about the team to learn more.