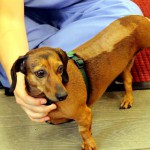 Veterinarians at Iowa State University are hoping to give 60 dogs a second chance at walking.

The trial is run by Dr. Nick Jeffery and Dr. Hilary Hu with ISU’s Veterinary Medical Center, and the team began recruiting for their trial in January. The trial will be using the test drug chondroitinase, an enzyme which helps to dissolve scar tissue around the dog’s injury.

“There’s been a lot of potential treatment for spinal cord injury. This is probably the one that is showing to be most effective based on preliminary studies and other reports on safety and ethicacy,” Hu said. “Unless we’ve got a controlled clinical trial, it’s really hard to say if something that’s been shown to work in the lab is actually going to help real, live patients.”

Each dog admitted into the trial will be part of a six-month program. After an initial evaluation, each dog will spend a week in ISU’s Hixson-Lied Small Animal Hospital and will be given physical therapy each day. The dogs will then be asked to return one month, three months and six months after their first week of therapy.

On first evaluation, only half of the dogs will be given the chondroitinase injection, but all dogs in the trial are guaranteed free physical therapy. At the end of the six-month program, Hu and Jeffery will study how the injected dogs’ coordination stands compared to the dogs who did not receive the injection.

Hu said the trial currently includes 15 dogs, but she hopes to get 60 involved. Of the first 15, Hu said the trial has dogs arriving from “all over the place,” ranging from New York and Florida to California and Texas.

The trial is looking for small to medium-sized applicants, weighing 45 pounds or less. Hu said each dog must have a mid-back injury older than three months.

“In the first three months, things can change,” she said. “The spinal cord can repair itself and regenerate, we don’t want to disturb the natural process.”

Hu added that owners interested in the trial should expect to pay only one fee of $100, which covers hospital costs. The injection and physical therapy are free, and funding is provided by the International Spinal Research Trust, a charity organization established to find treatments for human spinal cord injuries.

If the trial shows successful results, Hu said there could be potential to use the injection in future human treatments.

“If we can show ethicacy and safety in our patients, the next step would be to translate to human medicine as well,” she said. “So there’s potential we could be helping human patients by doing this clinical trial helping our veterinary patients.”

Court approves $13.55M personal injury settlement against Boeing and others over...