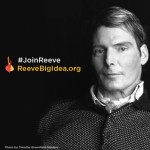 The family of Christopher Reeve is announcing what it calls a “game changer” in the treatment of spinal cord injuries.

“It’s hard not to think, ‘What if he was here and what if he was present for this breakthrough?’” Matthew Reeve, the late actor’s son, told People magazine on the eve of the 10th anniversary of Reeve’s death.

“My father dreamed of a world with empty wheelchairs and gave hope to a whole community… this is a key new step in that hope becoming realized.”

Four paralyzed men who were not able to move any muscles below their neck or chest can now move their toes, feet and legs, and are even able to stand with the help of epidural stimulation, the Christopher & Dana Reeve Foundation announced Thursday.

The therapy involves implanting a device that’s wired to the paralyzed patient’s spinal cord and applies an electrical current, which helps provide signals that would normally come from the brain, according to the foundation’s “The Big Idea” website.

It noted that the treatment also improved the four men’s bladder and bowel control, sexual function, and cardiovascular capabilities.

Olympic gold medalist Amy Van Dyken-Rouen, who was paralyzed in an ATV accident this summer, tweeted her happiness about the news.

Reeve’s family is now asking the public for help with funding a study with 36 new patients to further explore the effectiveness of epidural stimulation.

Some 6 million people in the U.S. live with paralysis, according to the Christopher & Dana Reeve Foundation.

Christopher Reeve was paralyzed during an equestrian competition in 1995. After the accident, the “Superman” star became a passionate and vocal activist in the quest for curing spinal cord injury. He died on October 10, 2004, at the age of 52.

To learn more about the BIG IDEA campaign, go to ReeveBigIdea.

Are disabled teachers getting a raw deal?