Robotics are helping paralyzed people walk again, but the price tag is huge 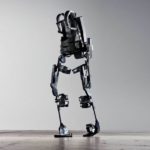 Ashley Barnes was 35 years old when doctors told her she would never walk again.

A botched spinal procedure in 2014 paralyzed her from the waist down. The Tyler, Tex., resident had been an avid runner, clocking six miles daily when not home with her then-9-year-old autistic son, whom she raised alone. Life in a wheelchair was not an option.

So she threw herself into physical therapy, convinced she would one day run again. Soon she realized that wasn’t a reality.

Although she wore a brave face, “I would save my moments of crying for my room,” she said.

About a year later, hope resurfaced when she learned of the ReWalk system, a battery-powered robotic exoskeleton that attaches to the legs and lower back. It contains motors at the knee and hip joints and sensors to help it adjust with each footfall. While wearing the device and holding two forearm crutches, someone with complete lower-limb paralysis can walk.
Rehabilitation centers often employ such devices in physical therapy, which is how Barnes first encountered one at the Baylor Tom Landry Center, a rehab clinic in Dallas. After seven months without being able to stand, she did. Then she took a step as she began to learn how to walk again.

After working with the ReWalk system at her rehab center, Barnes, who uses a wheelchair at home to get around, decided she wanted one of her own. But Tricare, her insurer, denied the request.

In a statement, Tricare said it “does not cover these devices for use on a personal basis due to concerns with their safety and efficacy. This is particularly important due to the vulnerability of paralyzed users in the event of a fall.”
Two years and countless no’s later, Barnes still doesn’t have one because, according to Tricare, it isn’t “medically necessary.”

“This is medically necessary,” she said. If she had one of the devices, “I’d be able to go to the bathroom. I would be able to walk around, exercise in it. I would love to be able to stand up and cook things in my microwave or on my stove.”

She paused before adding, “I would no longer have to look up at my son.”

About 28 percent of the more than 5.2 million Americans living with paralysis survive on an annual household income of less than $15,000, according to the Christopher and Dana Reeve Foundation. The basic expenses of living with paraplegia are, on average, $519,520 in the first year and $68,821 each subsequent year, according to the National Spinal Cord Injury Statistical Center. Furthermore, only 34.3 percent of people are employed 20 years after a paralysis-causing injury.

To date, ReWalk has sold only 118 personal devices in the United States.

Some people do get devices covered by insurance, but it can be an onerous process, as evidenced by Mark Delamere Jr. The Boston native, 19, was paralyzed in a car accident in 2013, on the third day of his freshman year of high school.

But for two of his teenage years, he sat in a wheelchair while his family filed claims and appealed denials.

“They don’t really classify these things with the purpose of you getting better, because they think the injury is never going to change,” his father, Mark Sr., said.

Eventually, though, Mark Jr. got approved by his insurance company and received the ReWalk, which he uses for at-home therapy and just to “walk around the house and the neighborhood, up and down the street.” Asked to describe the feeling, he was at a loss for words.

More hospitals are putting patient comfort and wellbeing at the forefront of their operations — from staff hires to building design to team structure.

“It’s kind of crazy,” he said. “It just feels kind of — I don’t really know. It feels so different.”

But his story is rare. “People are paying out of pocket or fundraising” for exoskeletons, said Dan Kara, research director for robotics at ABI Research, a technology analysis and consultant company.

The price of the devices exceeds their value in the eyes of insurers, which “want to be able to prove they actually improve quality of life and utility,” said Howard Forman, a Yale professor of diagnostic radiology and public health. “Utility” means that an exoskeleton would provide a medical benefit beyond simply helping people move around and complete daily tasks.

Virginia Tech researchers found that these devices, by getting otherwise immobilized people to move around, can help them manage spasticity — a continuous contraction of muscles, which can be quite painful — and improve bowel function. Barnes said when she was training with the exoskeleton, tending to her bowels took about 20 minutes each day, not the customary hour.

One major concern is how relatively untested the technology is outside the controlled environment of a rehabilitation facility. Indeed, they don’t always work as planned.

Stacey Kozal, a 42-year-old Ohio resident, was paralyzed from the waist down after what she said was a devastating flare-up of lupus. For more than a year, she fought with her insurance provider, Anthem, in hopes of obtaining Ottobock C-Braces. These devices have bendable knee joints equipped with sensors that “measure the current position of the joint every .02 seconds,” according to Ottobock’s website. A built-in microprocessor adjusts ankle pressure while a hydraulic system moves the knee to help the user place her foot down in the right place.

Eventually, Anthem agreed to cover a C-Brace for each leg, which Kozal used to hike the Appalachian Trail, where limitations revealed themselves. The battery required constant recharging. Rain was problematic because the C-Brace isn’t waterproof.

While she plans to wear her C-Braces around the house, she’s now hiking the Pacific Crest Trail using old-fashioned braces that lock her legs in place. She uses her core, hips and upper body to swing her legs forward, and she keeps her balance with the aid of forearm crutches. C-Braces are heavier than traditional devices, so when their batteries died on the Appalachian Trail, they made it more difficult for her to move around.

Another major issue for insurers, though, is the price. But Forman said, “Though these technologies are incredibly expensive now, we have all kinds of evidence that eventually . . . they can become affordable to anyone.”

Indeed, some entrepreneurs are working on cheaper solutions. Silicon Valley start-up SuitX created a lightweight model called the Phoenix. While most exoskeletons have motors powering each joint, the Phoenix simply uses two hip motors. Even so, if approved by the FDA, the device would cost $40,000, according to SuitX.

“The rehabilitation marketplace is limited by the number of people who have these conditions,” Kara said. The exoskeletons are “basically handcrafted, which is expensive. If you could up the volume, you could lower the price.”

The key would be expanding the user base. One way to do that, he noted, is to sell the devices for purposes other than rehabilitation. Warehouse workers might wear them to assist with lifting heavy loads. Some companies are already testing this idea: Lowe’s, for example, recently outfitted several of employees with exoskeletons as part of a pilot program.

The worldwide market for exoskeletons — $97 million now — is expected to grow to $1.9 billion by 2025, according to ABI Research.

Kara compared the prospects for exoskeletons to the growth of LiDAR, which uses pulsed lasers to record topographic features. For years, researchers used LiDAR to create 3-D maps of the Earth, but it was expensive. However, the rise of self-driving cars, which use the technology to navigate roadways, fostered improvements in the technology. As a result, Kara said, the price of LiDAR systems has begun to fall and is “expected to drop dramatically, from tens of thousands of dollars to hundreds of dollars or less.”

Waiting for exoskeleton prices to drop is tremendously frustrating, Barnes said. “We take so much for granted when we don’t have physical problems,” she said. “Like just being able to reach up and grab something in my laundry cabinet without having to break my neck to get it.”

She isn’t ready to just accept that she — and others who will face these issues — might never get a sense of greater normalcy.

“My biggest reason for standing up tall to them is I want to do it for all those behind me,” she said. “The more it gets approved, the more it can’t get denied.”