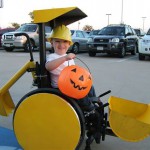 On Halloweens past, 9-year-old Caleb McLelland has driven a backhoe with bright yellow wheels, flown through the clouds as Superman and sped into action in his Batmobile. He made all of those transformations in attention-grabbing costumes that incorporated his wheelchair.

“His chair is very much a part of him,” Cassie McLelland says of her son, who has spina bifida. “It makes sense to make it a part of his costume.”

All kids love Halloween, but for kids in wheelchairs it’s a particularly special time.

It’s one day of the year they get to be like everyone else — just another kid dressed up and on the hunt for candy. Their creative costumes are anything but ordinary, though.

McLelland has embraced the challenge of including Caleb’s wheelchair. And Caleb enjoys all the attention he gets in his costumes, including Mario in his Mario Kart.

“He could be Mario, or we could step it up a notch and make it look like he’s driving a car,” McLelland says. “It kind of takes the costume to the next level.”

Even amid the mad scramble for candy, wheelchair costumes draw heaps of admiration.

“Everybody loves it,” said McLelland, of Mansfield, Texas. “People stop and take his picture.

We’ve gotten nothing but great compliments and feedback and big smiles.”

When she made his first wheelchair costume in 2008, when Caleb was 3, McLelland hadn’t seen many others that encompassed wheelchairs. She has since started a wheelchair costume blog to share ideas, and has watched the trend grow as the Internet filled with photos for inspiration and how-tos. Who could forget the video of a young boy pushing his wheelchair-turned-ice cream truck that went viral several years ago?

“It seems like in the last few years, you’re seeing it a lot more, and more and more of these great creations,” McLelland said.

The recognition that Amber Bobnar’s son Ivan receives for his costumes means the world to them both. Ivan, 9, is blind and has multiple physical and cognitive impairments. Though he is nonverbal, he makes it clear how much be loves his costumes, smiling when he’s complimented, Bobnar said.

“Halloween is his favorite holiday,” she said. “He’s a very happy kid and a very social kid. He loves all the attention he gets.”

Bobnar goes all-out. Last year, she built a hot air balloon for her balloon-loving son, with Ivan riding in the basket and balloons flying overhead.

“I try to make his costume as big and over-the-top as possible to really get people’s attention,” she said.

As kids in their Watertown, Massachusetts, neighborhood see Ivan, they often ask to trick-or-treat with him.

“I like that we’re able to get other kids involved,” Bobnar said. “It’s nice for them to hang out with a child and see, ‘he’s just like me. He likes candy just like I do.’”

Though some holiday traditions don’t work for Ivan because of his disabilities, she said Halloween has been a hit. “It’s fun to be able to create something that allows him to experience a holiday in a similar way that other kids do,” Bobnar said.

In Phoenix, Cassandra Byrd said her 7-year-olds, Kyle and Lauren, have loved dressing up in elaborate costumes that surround their wheelchairs.

“I feel like as a parent, when we incorporate their chairs into the costumes, it completes the picture for them as the way they perceive themselves,” said Byrd, whose twins have spinal muscular atrophy.

The costumes, which they wear not just on Halloween but at fall festivals and costume contests, have helped make it easier for other kids to approach them.

“Sometimes, a wheelchair is a barrier to being social with other children,” Byrd said, noting that young kids can be overwhelmed or intimidated by the large wheelchairs. “With a cool costume, it takes away the barrier.

“Instead of staring in confusion or fixating on the wheelchair,” she said, “they’re fixated on the entire scene, the whole picture.”

Many kids are awestruck, exclaiming, “That’s the coolest. I want one of those, Mom.”

“We hear that a lot,” Byrd said. “I think they’re very proud,” she said of Kyle and Lauren.

McLelland hopes people view Caleb, a good reader who plays basketball, as simply another face in the Halloween crowd.

“We all want people to see, more than anything, that yeah, our kids use wheelchairs,” but they’re still just kids, she said. “They’re just having fun, and this is just part of their lives.”

By Lisa Flam
Lisa A. Flam is a news and lifestyles reporter in New York.

Websites with Creative Costumes for Wheelchairs

The inspirational doctor paralyzed from the waist who can still perform...