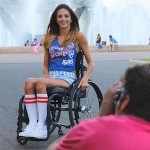 Twenty-five-year-old Perla, who broke her neck in a car accident seven years ago, was the top vote getter among the 100 or so entries to appear in ‘The 7 Line’ calendar,’ an annual promotional pinup featuring attractive young women wearing Mets-inpired clothing.

Amanda Perla thought for sure her wheelchair would be an issue.

Sure, she was wearing a bright blue Mets cap and a bright blue shirt and was flashing a smile perfect enough for a toothpaste ad. But she thought the wheelchair, the one she has been in since breaking her neck in a car accident seven years ago, would be what people would notice in her audition photos for “The 7 Line” calendar, an annual promotional pinup featuring attractive young women wearing Mets-inspired clothing (the line is not affiliated with the actual New York Mets).

“I was extremely reluctant to send my photos in. I think you will understand why once you have viewed them,” Perla said in an email to Darren Meenan, creator of the 7 Line brand and editor of the calendar. “But my family and friends kept insisting that I do.”

And it’s a good thing they did. The 25-year-old Perla not only was voted one of the 12 winners to appear in the 2015 calendar, she was the top vote getter, which, says Meenan, is what the calendar is all about.

“The idea has never been to find a Victoria Secret’s model,” says Meenan. “It’s the complete opposite. We want fans who love the Mets and our brand and what we do.”

The brand started as a Mets-themed T-shirt company formed by Meenan a few years back and has grown into a one-stop stop for Mets fans, offering all sorts of gear, trips to Mets games all over the country and the annual calendar.

During one of those trips, Perla was watching a Mets-Marlins game from her home in Orlando, when she noticed the famous “7 Line Army” in the crowd. Perla reached out to Meenan to find out if the group would be returning to Florida. He told her to check his website for future trips, and while surfing around, she found the open call for calendar girls.

“I’m a huge Mets fan, have been my whole life, why not?” says Perla, who lived in Edison (N.J.) until her family moved to Port St. Lucie when she was 5. “We took some pictures in the front yard, but when I started looking at photos of other girls, I thought ‘oh well maybe, this isn’t right for me.’ ”

Out of the 100 or so entries Meenan received, Perla made the cutdown to 31 (“a tip of the cap to Mike Piazza,” Meenan says). The voting then went into the hands of online voters, who are allowed to cast just one vote per IP address. Perla dominated the competition, bringing in 4,000 of the 40,000 votes cast.

Perla has been fighting the odds since April 21, 2007, when a horrific traffic accident in Port St. Lucie — the spring training home of the Mets — left her with a broken neck and little hope to walk again. According to her mother’s website, Perla was sleeping in the passenger seat when the driver of the car Perla was in also fell asleep.

“I was originally paralyzed from the neck down,” says Perla. “But I did regain strength and mobility in my arms while in rehab. Thanks to Project Walk Orlando (a spinal-cord injury center she founded with her mother), I’m able to stand by myself (for a short time), walk with a walker and ride a spin bike.”

When Perla came to New York in September, she was in her wheelchair, doing her photo shoot in front of the famous Unisphere in Queens. She will be back on Nov. 15 for the official calendar launch party at McFadden’s Citi Field, where Perla and her relatives — many of whom live on Long Island — will see for the first time how the pictures came out.

Since she was the top vote getter, Perla had her choice of months and picked March, not only because it’s her birth month, but also because it has a special meaning to her and all Mets fans.

“It’s because I’m representing Florida and spring training,” she says. “And it’s toward the beginning of the season. Everyone is optimistic.”

United Spinal Presents Free Webinar On How to Get the Right...