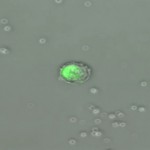 When stem cells are propagated in the laboratory, they typically differentiate into one or another specialized cell type, usually forming cell masses that show little organization or spatial coherence. Exceptions include the emergence, in culture, of retinal and anterior cortex-like tissues. For the most part, however, stem cell aggregates in the laboratory prefer to remain lumps.

Despite coaxing, they refuse to organize themselves into structures that resemble embryos. In particular, they avoid taking the earliest steps of embryonic development—axis formation and gastrulation, the organized movement of cells that, using the initial axis as a reference, positions the head and the tail, the front and the back.

Now, however, researchers at the University of Cambridge have managed to reconstruct the early stages of mammalian development using mouse embryonic stem cells, showing that a critical mass of cells—not too few, but not too many—is needed for the cells to begin self-organizing into the correct structure for an embryo to form. The researchers, led by Professor Alfonso Martinez-Arias, presented their finding in a pair of papers that appeared in the November issue of the journal Development.

The researchers showed that if the number of cells aggregated initially is similar to that of a mouse embryo, the cells generate a single axis and this serves as a template for a sequence of events that mimics those of the early embryo. By manipulating the signals that the cells see at a particular time, the researchers were able to influence what type of cell they become and how they are organized. In one of the experiments, for example, activation of a particular signal at the correct time elicits the appearance of the mesoderm, endoderm, and ectoderm—the precursors of all cell types—with a spatial organization similar to that of an embryo.

In another article, “Wnt/β-catenin and FGF signalling direct the specification and maintenance of a neuromesodermal axial progenitor in ensembles of mouse embryonic stem cells,” the authors detailed how “a specialized population of cells emerges at the end of gastrulation that, under the influence of Wnt and FGF signaling, expands and generates the spinal cord and the paraxial mesoderm.”

In other words, the researchers were able to generate the early stages of a spinal cord, which they showed forms as part of the process of gastrulation. This finding complements previous research from the University of Edinburgh and the National Institute for Medical Research showing that embryonic stem cells can be coaxed into becoming spinal cord cells; the Cambridge researchers went further, however, showing that in the embryo-like aggregates, the structural organization is more robust and allows for the polarized growth of the tissue.

“It is early days, but this system promises insights into the early stages of development and what determines the specification of the different cell types,” said Professor Martinez-Arias. “This will allow more robust protocols for differentiation with cues that mimic those that the cells are subject to in embryos.

“Most significantly, the system will provide a means to test, experimentally, how a homogeneous group of cells organizes itself in space, a central process in the development of any organism, and the ability to recreate in culture the niches that adult stem cells create during embryogenesis and which have remained elusive experimentally.”