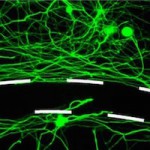 Case Western Reserve scientists have developed a new chemical compound that shows extraordinary promise in restoring function lost to spinal cord injury. The compound, which the researchers dubbed intracellular sigma peptide (ISP), allowed paralyzed muscles to activate in more than 80 percent of the animals tested. The remarkable study, partly funded by the National Institutes of Health, appears in the December 3 edition of the journal Nature.

Case Western Reserve University School of Medicine Professor of Neurosciences Jerry Silver, PhD, the senior author, led an international team of scientists in the research in which 21 of 26 animals with spinal cord injury regained the ability to urinate, move or both. In the experiments, the peptide appears to allow nerve fibers to overcome scarring that normally blocks their regrowth.

“This recovery is unprecedented,” Silver said. “Each of the 21 animals got something back in terms of function. For any spinal cord-injured patient today, it would be considered extraordinary to regain even one of these functions, especially bladder function. ISP additionally has treatment potential for diseases where the body produces destructive scarring such as heart attack, peripheral nerve injury and multiple sclerosis (MS).” (Silver’s team now is testing the effectiveness of ISP in animal models of these disorders.)

Immediately after a central nervous system (CNS) injury, molecules known as proteoglycans collect in scar tissue at the injury site and in the perineuronal net (PNN). In healthy tissue, proteoglycans are key components in the matrix between cells and play a key role in maintaining the structure of the nervous system. However, following injury, proteoglycans are overly abundant in scar tissue and the impenetrable nets around synapses throughout the brain and spinal cord. The consequence is a formidable barrier preventing regeneration and new nerve connections. Proteoglycans produce a sticky quagmire, trapping and restricting the cut nerve fiber tips (called growth cones) from making their journey back to their proper synaptic connections. It is these connections that transmit critical information through electrical impulses to nerve cells that enable a person or animal to control bodily functions.

“There are currently no drug therapies available that improve the very limited natural recovery from spinal cord injuries that patients experience,” said Lyn Jakeman, PhD, a program director at the NIH’s National Institute of Neurological Disorders and Stroke, Bethesda, Md. “This is a great step toward identifying a novel agent for helping people recover.”

The investigators designed the ISP peptide to turn off the neuron’s proteoglycan receptor on/off switch. In addition, they added a shuttle called TAT (trans-activator of transcription) to send ISP throughout the nervous system and across cell membranes. ISP travels to and penetrates the membranes of cells, including the scar tissue-covered injury site. Because the peptides can penetrate tissue, ISP can be delivered systemically rather than with a direct injection to the spinal cord.

“Our treatment strategy was designed to be easily translatable,” said Bradley Lang, a Silver lab graduate student and lead author on the study. “Our goal is to progress this treatment forward for use as a therapeutic following spinal cord injury.”

For this study, 26 severely spinal cord-injured animals (rats) received daily injections for seven weeks. During that time, the animals were assessed for their ability to walk, to balance and to control when and how much they urinate. The results showed that 21 of the 26 animals regained one or more of the functions well after injections began. Some animals regained all three behaviors and others one or two out of three.

“We don’t know why a particular animal regained a specific function,” Silver said. “That is one of the big remaining questions.”

One clue may be the small amounts of nerve tracts spared in the animals’ spinal cords. These remaining tracts are differentially damaged by bleeding or inflammation sustained just after the original injury. One especially important tract that responded robustly to ISP contains serotonergic fibers. These fibers release the neurotransmitter serotonin into the spinal cord, which, in turn, greatly enhances functional activity of the scant numbers of remaining fiber tracts that control the behaviors that were restored.

Each animal had different serotonergic sprouting patterns and variable tract sparing, which probably accounts for the different functions they were able to regain. “Sprouting is a critical phenomenon,” Silver said. “Even if there are just a few intact fibers left after the injury, it could be one critical piece that brings back an important function.”

Silver also commented about a next research step regarding ISP. “Our goal is to progress this treatment forward for use as a therapeutic following spinal cord injury,” he said.

Annually, the School of Medicine trains more than 800 MD and MD/PhD students and ranks in the top 25 among U.S. research-oriented medical schools as designated by U.S. News & World Report’s “Guide to Graduate Education.”