Duke student mentors others with disabilities 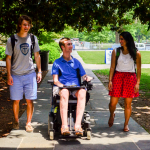 The Indianapolis native planned to attend Duke University in the fall of 2011 on a full merit scholarship, and hoped one day to be a politician.

But Ruckelshaus was forced to reevaluate his plans. Just weeks before he was scheduled to arrive on campus, he was involved in a diving accident that left him paralyzed from a severe spinal cord injury.

As he watched his friends get ready to begin college, he headed to Shepherd Center in Atlanta to face the daunting challenge of rehabilitation and preparing for life with quadriplegia.

“My guiding light and mantra during what were some pretty dark days was finding a way to get back to Duke,” Ruckelshaus, who is currently a junior, says. “It may be cliché, but it’s true,” he laughs.

He describes support from the Duke community during this time as “extraordinary” — remembering receiving letters from faculty and students, and even signed jerseys from the basketball team.

After a year of rehab and many conversations with administrators and Duke’s Disability Management System, he arrived on Duke’s campus in the fall of 2012. He credits this support with allowing him to flourish — both in and out of the classroom — during his first year.

“There was something almost spiritual about entering a classroom again for the first time,” he says. “I was able to compete — and excel — on a level playing field. It’s an experience I wanted everyone to be able to share.”

Outside of the classroom, Ruckelshaus found a home for himself on campus — joining a fraternity, getting involved with student government and conducting his own research.

As the year drew to a close, he began thinking about ways to help others with similar disabilities have equally positive college experiences.

The result of Ruckelshaus’s brainstorming was Ramp Less Traveled, a quickly-growing nonprofit organization dedicated to providing financial support and mentorship to students with spinal cord injuries.

The organization offered its first scholarships in May 2014 to three students who currently attend Auburn University, North Carolina State University and Rhodes College in Tennessee.

Support for the organization has grown in recently — with Mitch Daniels, former Governor of Indiana and current President of Purdue University, and Tamika Catchings, a prominent figure in the Women’s National Basketball Association, signing onto its board of advisers.

“There’s so much to consider — from housing to academics to social life — which is why mentorship is such an important factor,” Ruckelshaus says. “It’s about lowering the barriers to higher education and emphasizing inclusion.”

He noted that conversations about inclusion are often framed in terms of race or sexual orientation, but comparatively fewer discussions address those with disabilities.

Ruckelshaus hopes that discourse will continue to expand in 2015, which marks the 25th anniversary of the Americans with Disabilities Act.

“So often for schools, it’s mostly about compliance, about not getting sued,” he says. “But we need to go further than that, and I’m excited to be play a part, however small, in that larger movement.”

‘Incredible’ Journey- From Paralyzed to Helping Others Walk