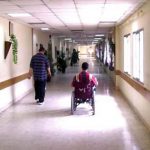 Baghdad — Mohammed Abdul Hussein moans as he tries to shift his limp body across a bed in a stultifyingly hot hospital room. The 26-year-old police officer, who was shot by an unknown assailant while riding home on a motorcycle, is a Paraplegic.

Down the corridor, 12-year-old Saddam Radi, who lost the use of his legs after a bullet tore through his torso during a firefight, struggles to raise his arms in a therapy session. Nearby, Jassem Tharaya, 51, a retired civil servant, repeatedly pulls a cord that works the muscles in his right arm. He has no use of his legs.

Hussein, Radi and Tharaya are the lucky ones. Each has a coveted bed at the Ibn al-Kuff Hospital for Spinal Cord Injuries, Iraq’s only hospital specializing in such care. As the war grinds on, medical workers say they are overwhelmed by such serious injuries.

“There’s more pressure on us than at any time before,” said Barazan Majeed, 46, a physiotherapist who has worked at Ibn al-Kuff since 1984.

With only 105 beds, hospital officials are struggling to keep up with the estimated 200 serious spinal cord injuries they see annually. Some patients have waited as long as a year before being admitted, and the hospital suffers from chronic shortages of staff, medicine and equipment, says Ibn al-Kuff Director Safaa Mahdi.

Currently, the hospital relies on mostly inexperienced personnel. Mahdi says 60 highly trained employees — many of whom had worked at the hospital since its inception — have fled the city in the past year. For those who remain — a doctor, seven nurses and a handful of physiotherapists — the strain is tremendous and the pay meager, roughly the equivalent of $200 to $300 monthly.

Built in 1983 on the outskirts of the Shiite district of Sadr City, Ibn al-Kuff was looted after the U.S.-led invasion four years ago. Care International, a humanitarian relief agency, then helped finance its restoration and replace stolen equipment. Today, staff members say, the Iraqi government has the funds to initiate more improvements, but security issues make the facility off-limits to most Baghdad residents.

And since Ibn al-Kuff is the only hospital of its kind in the country, Iraqis have few options other than to travel abroad for treatment.

But even those who can afford to leave Iraq are hindered by security and travel restrictions. An Iraqi seeking medical treatment in the United States must first find a physician or medical facility willing to provide care. Then he or she must apply for a special medical visa at a U.S. Embassy outside of Iraq.

On a scorching day last month, the corridors and rooms were sweltering after the hospital’s air conditioning system broke down. The bathrooms lacked running water and reeked of human waste. The only functioning therapy equipment were parallel bars and hand-pulled cords.

Netham Kamel, a 44-year-old nurse who has worked at the hospital for more than 25 years, says she now performs duties once exclusively handled by physicians.

“I have 25 patients,” Kamel said, while hustling between rooms. “I can’t care for them all properly.”

Yet, even with its limited resources, Kamel and other staff members still manage to inspire their patients.

Abdullah Mehdi, 10, said he has gained more feeling in his legs since beginning therapy earlier this year. A car bomb in the Adhamiya district of northern Baghdad in February paralyzed his lower body. The resolute youngster says he will walk again and plans to return to school this fall.

Tharaya, the retired civil servant, says he “feels much better” after daily exercise and therapy, though physicians have told him he probably will never walk again.

Not far away lies 10-year-old Yamama Mohammed, who is a paraplegic after being struck by shrapnel from a mortar round in March while playing in the family garden. The explosion killed her 9-year-old sister, Khansa’a. A Catheter runs along her thigh, her bladder is infected, and she is losing sight in one eye. When a deafening roadside bomb exploded outside the hospital — less than 100 yards away — Yamama’s room violently shook, and she and her mother, 35-year-old Israa Ibrahim, recoiled in fear.

“If anything happens to her,” Ibrahim said, “her father will kill himself.”

With an increasing demand for beds, most patients can’t stay as long as they would like. Even those who gripe about the hospital’s problems are not eager to leave.

Ahmed Naji, 23, is a former member of the Interior Ministry’s special forces. Last year, he was paralyzed from the waist down after a car bomb struck his patrol. He complains about having to pay for medication, food and a water-powered air cooler.

But when recently told he would have to vacate his room, Naji asked: “Who is going to help me when I go outside?”

James Palmer, Chronicle Foreign Service
This article appeared on page A – 9 of the San Francisco Chronicle