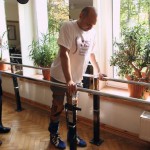 A sound technician whose spine was shattered in a major accident has urged caution over a “breakthrough” procedure which enabled a man to walk again.

Darek Fidyka, who was paralysed from the chest down in a brutal knife attack in 2010, can now walk using a frame after cells were transplanted from his nasal cavity into his spinal cord.

The treatment, which was a world first, was carried out by surgeons in Poland in collaboration with scientists in London.

‘More impressive than man walking on the moon’

Professor Geoff Raisman, chair of neural regeneration at University College London’s Institute of Neurology and the man who discovered the technique, described the innovative procedure as “more impressive than man walking on the moon”.

But former BBC employee Adam Jones, who was injured in a catastrophic accident 15 years ago, says more investment and research is needed before such treatments are widely used.

Mr Jones was working as a sound technician on a children’s TV programme. His team were filming the deconstruction of a wind generator used as part of a new-age settlement but disaster struck when he was instructed to capture images of the mast.

The 52-year-old, from Cardiff, said: “As I approached the mast the whole thing began to collapse. I didn’t see it coming and it landed straight onto my back and I was instantly in agony.”

The accident shattered Mr Jones’ spine, leaving him wheelchair-bound through paraplegia and in constant pain.

He takes large doses of morphine each day which reduces the pain but doesn’t come close to removing it.

Mr Jones said: “Despite being moved to tears hearing Professor Raisman talking about his research and how it has helped a victim of spinal injury like me – and as much as I am thankful that the professor has taken it upon himself to make a positive change – I am sceptical as to how much this technique should be praised until more trials have been conducted.

“Darek’s case was one of countless such injuries every year. He was given intensive rehabilitation alongside his surgery which the majority of spinal injury victims could not nearly afford, which could have also been a big factor in his recovery.

“As someone who has gone through the daily struggle of living with serious injuries, I feel this technique, as great a result as it has produced, needs to be peer reviewed and trialled on many more patients and the evidence published in a serious journal like the Lancet before it can provide hope to people living with spinal injuries.”

Mr Jones consulted personal injury specialists Hugh James solicitors after his accident, who helped him to claim compensation which now funds his daily treatment and ongoing physiotherapy as well as covering his loss of earnings.