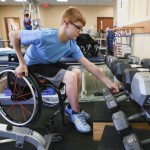 An accidental gunshot left Kyle Bartolini paralyzed as a preschooler. But today, he’s an active teenager who can get around with crutches or a walker and loves to fish, swim, kayak and play paintball.

He owes this transformation to an exercise-based therapy that teaches lost skills to broken nervous systems. Called locomotor training, it allows people with spinal cord injuries to practice standing and stepping while suspended above a treadmill. University of Louisville Neurosurgery Professor Andrea Behrman is pioneering the treatment in children in a new pediatric program.

“I wouldn’t be able to do 90 percent of the things I do today without it,” said Kyle, 14, of Portage, Ind., by Lake Michigan. “When I first got my injury, I couldn’t do anything on my own. I couldn’t even sit up on my own.”

Behrman, founder of the NeuroRecovery Training Institute, said spinal cord injuries can be even more devastating for children than adults, interrupting normal bone development and sometimes robbing them of abilities such as walking before they fully learn them. But when it comes to recovery, children have an advantage.

“Children’s central nervous systems are still relatively plastic compared to the brains and spinal cords of adults,” said Susan Howley, director of research at the New Jersey-based Christopher & Dana Reeve Foundation. “The research suggests there’s greater opportunity in a child to remold the connections in the brain and spinal cord and promote healing.”

Behrman said young patients like Kyle are helping reveal some of the mysteries of that healing.

“They’re like pioneers to me. They’re trailblazers,” said Behrman, who joined U of L in 2012 and launched the pediatric program at Frazier Rehab Institute shortly afterward.

“Before, the paradigm was, ‘You’re not going to walk again’… Now, our expectations are different.”

Before his injury at 3 1/2, Kyle loved to run, jump and ride his bike. All that changed after a Labor Day party in 2003 at a relative’s boyfriend’s home.

Kyle’s mother, Jamie Bartolini, said Kyle had always been fascinated by toy guns, and she warned him never to touch a real one. But that day, he found a loaded gun in a bedroom, pulled the trigger and shot himself in the chest. Later he told his mother, “I thought the gun was play.”

The bullet lodged in his spinal cord. Doctors removed it, but he remained paralyzed from the chest down, with only partial use of his arms, Behrman said. His parents who at first worried he wouldn’t survive, turned their attention to improving his quality of life.

“We wanted to help him be the best he could be,” she said, “so we searched high and low to find whatever we could to help him.”

They eventually found Behrman in her former job at the University of Florida, where she was researching locomotor training in children. Kyle joined the study at 4½ years old, and began intensive treatment.

Behrman said families commit to a minimum of 60 sessions, five days a week, for 1 1/2 hours a day. Children spend an hour of each session on the treadmill, suspended by a harness, with therapists and technicians helping them move their legs correctly — with the goal of gradually lessening support as healthy neurons reorganize the nervous system’s circuits. Children spend the final half-hour of sessions on the ground, trying out skills such as walking or getting up from a chair in the right way. They are expected to practice those skills at home.

At first, Kyle got frustrated by the long hours of therapy, telling his mom, “My legs just don’t work.”

But two months into the study, he took his first two steps across the floor — soon afterward greeting his father in a walker. And by the time he started school, his mother says, “he walked all the time” on a walker or with crutches, turning to his wheelchair mostly for long distances. He never let his disability stop him from kayaking, hunting, or riding his “bike,” which is actually a large tricycle.

“He does everything all the other boys do,” Jamie Bartolini said. “Locomotor training has changed his life. It’s made him who he is today.”

Behrman developed the pediatric locomotor program along with U of L professor of neurological surgery Susan Harkema, who pioneered the rehabilitation strategy in adults. Howley said U of L “is the only place offering pediatric locomotor training governed by all the scientific principles” — although Behrman added that other places provide variations of the therapy.

Behrman said she has helped about a dozen children since coming to Louisville. Not all have learned to walk again, but smaller victories can be extremely significant as well, she said. “We have a child who can now sit for the first time.”

“If we know one thing now, it’s that exercise is good for everybody, even for people who are paralyzed,” Howley said. “There’s never going to be a magic bullet” for spinal cord injuries, but activity-based therapies such as Locomotor Training are a crucial part of treatment. “All of those kids going through (Behrman’s program) are lucky.”

Kyle agreed, calling Behrman “one of the best ladies ever.” He also credits his mom for pushing him and reminding him what he’ll be able to do if he keeps practicing his walking.

As Kyle’s body has grown and changed with adolescence, he’s had to work harder to maintain his progress. But that hasn’t deterred him; he just works out more often. On a recent morning in the Frazier Rehab exercise room, he lifted himself out of his wheelchair onto a bench to lift weights after using a chest press machine.

Kyle envisions attending the University of Florida in a few years and becoming either a sports commentator or a detective — while moving from two crutches to one, then, someday, to none.