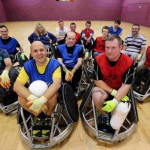 A WHEELCHAIR rugby team has become so popular that they have had to set up a waiting list for future players.

The Dorset Destroyers currently have 20 places, which have all been filled ahead of the sessions starting on Sunday, Nicholas Coombs, chairman and founder of the club, said: “It is a superb sport, where the players can really get their teeth into a good game.

“When we originally ran the taster sessions via Great Britain Wheelchair Rugby, we were totally blown away by the response.

“The first week we had five players and by week four it was up to 15.”

The Dorset Destroyers is the first wheelchair rugby club in the county and was launched last year.

The game is a fusion of ice hockey, handball and rugby and was founded in Canada in 1977.

Sue Coombs, club secretary and founder member, said: “Because of the great success of the Armed Services in the Invictus Games, where we won Gold in wheelchair rugby, it really hit home that it is being taken to heart by the public alongside our national game of rugby.”

The club currently has 10 wheelchairs but needs 20 in total, which it will be sharing among the players each week until it can get more funding in place.

Nick added: “We must ensure that all players get a chance to play. It would not be fair on the current or new players if we had lots of people attending, as they would not be able to play for so long.

“I would just like to add that, although we are taking people’s names for the waiting list, you are still very welcome to come down and watch and join in on the socials. They are just as important as the sport and we positively encourage our players to have a drink, chat and have a good laugh after the sessions.”

United Spinal’s “Roll on Capitol Hill” to Advocate for Policies that...