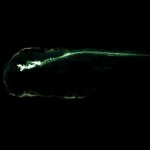 Scientists studying hatchling fish have made a new advance in studying a chemical in the brain that impacts on movement.

The team from the University of Leicester Department of Biology has examined transparent hatchling zebrafish to gain new insights into the working of neurons in areas of the brain that are normally difficult to access.

As a result, they have discovered for the first time both when and why the particular cells in the brain that affect movement are active.

The new study, funded by the Biotechnology and Biological Sciences Research Council (BBSRC), is published in the February issue of Current Biology.

Author Dr Jonathan McDearmid said: “Our research is aimed at understanding how dopamine, a neurochemical secreted by nerve cells (neurons) in the brain, influences neuronal networks in the spinal cord that control motor behaviour.

“Our understanding of dopamine function is largely derived from the study of dopamine-releasing neurons that are located within the midbrain, a structure located near to the base of the brain. However, vertebrates, including humans, also possess a cluster of dopamine-containing neurons in the forebrain. Unlike their midbrain counterparts, these neurons extend projections to the spinal cord, a region that is dedicated to the production of motor behaviours (such as walking and swimming). We know relatively little about the role this forebrain population plays in regulating behaviour: the main aim of our study was to address this problem.”

The Leicester team was able to overcome this problem by examining hatchling zebrafish which are transparent and lack bone tissue, which makes the brain accessible to study.

To study the activity of forebrain dopamine neurons, the biologists used a specialised technique called “electrophysiology” that allowed them to detect the electrical signals emitted by neurons as they release neurochemicals.

Dr McDearmid said: “We placed tiny glass electrodes onto forebrain dopamine neurons and onto motor-related neurons in the spinal cord. This allowed us to draw correlations between forebrain dopamine neuron activity and motor activity. We found that dopaminergic neurons exhibited low levels of activity when the animal was not moving. However, they become very active when the fish began swimming. This suggests that these dopamine levels in the spinal cord are dramatically elevated during periods of motor activity.

“To understand how these cells might affect the parameters of movement, we selectively removed these cells from the brain by exposing them to a high-energy laser beam. We then compared behaviour in fish that lacked these cells to behaviour in intact fish. We found that when our dopamine cells were deleted, the fish were far less likely to swim, which strongly suggests that dopamine has key roles regulating excitability of spinal networks.”

Dr McDearmid said that to date, researchers had not been able to get such clear insights into the inner workings of the brain: “Spinal cord projecting dopamine neurons are found across vertebrate species, including humans, so they are likely to have important roles in controlling behaviour. Considerable effort has been invested into understanding the function of these neurons . However, in most vertebrates these cells are located deep within the brain, which makes them very difficult to access. For this reason, previous studies have typically focused on the effects that dopamine drugs have on spinal networks.

“Whilst these provide important clues about how dopamine might affect behaviour, they cannot tell us when and why forebrain dopamine nerve cells are active: such information can only be obtained by directly monitoring activity of these cells. By capitalising on the technical advantages of the zebrafish model, we have been able to overcome this shortcoming and thus determine for the first time both “when” and “why” these dopaminergic cells are active.

“We are really proud to see our study published: we have been working on the spinally-projecting dopaminergic pathway for some years now. However, we quickly realised we needed to develop methods for directly observing activity in these cells in the context of animal behaviour if we ever hoped to fully understand how they influence movement. Mike Jay, the lead author, did a brilliant job of developing the electrophysiological techniques we needed to study these cells, which allowed us to make rapid progress towards understanding their function.”

Dr McDearmid added that the research is important as it helps scientists to better understand the role that dopamine plays in controlling behaviour. In addition, dopaminergic drugs that are used to treat neurological disorders such as Schizophrenia often cause motor side-effects. These effects have largely been attributed to changes in dopamine signalling within the brain. However, the data collected by the Leicester team suggests that at least some of these effects may be mediated by altered dopamine signalling in the spinal cord. Thus, a better understanding of how dopamine acts in this part of the nervous system may help inform development of new drugs that have fewer motor side effects.

He said: “This is basic research that helps us to develop a better understanding of how dopamine influences behaviour. However, in the long term our findings may be of relevance to understanding motor side effects caused by therapeutic drugs that affect dopamine signalling.”

Website founder goes from accident to advocate for people in wheelchairs...