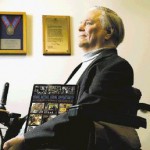 HOUSTON — After the head-on car crash, Lex Frieden thought he was OK.

He’d been in the back seat, not the front, that fall night in 1967, and he wasn’t bleeding.

“I’m fine,” he said, as medical personnel rushed to help the others. “I just can’t move.”

The 18-year-old freshman at Oklahoma State University had a broken neck. Days and weeks would pass before he fully understood what that meant. His dream of becoming an electrical engineer ended with the accident. As a quadriplegic, he couldn’t climb the stairs to get to his required classes, and there were no ramps or elevators to accommodate his wheelchair.

Those types of barriers, which kept millions of disabled Americans from living ordinary lives, began crumbling in 1990, when President George H.W. Bush signed the Americans with Disabilities Act. The civil rights legislation required equal access and equal opportunity for all.

Today, as Frieden looks forward to celebrations marking the ADA’s 25th anniversary, he also reminisces about his own efforts to get it written and passed into law.

Shortly after his accident, Frieden found himself in an Oklahoma City hospital, quizzing his doctor. He had just watched a movie in which a soldier sustained a spinal cord injury, returned home and immediately lost everything dear to him, including his wife.

When Frieden asked about his own future, the doctor was honest. “He told me I had to do as much as I could with what’s above my shoulders,” Frieden told the Houston Chronicle.

Frieden actually gained some confidence from the doctor’s words. “I thought of myself as a problem-solver. I am blessed to have a good intellect.”

Determined to return to college, Frieden applied to Oral Roberts University in Tulsa, a campus that was close to his family’s home and appeared to be barrier-free. But the A-plus student was rejected. He was told they didn’t accept students with disabilities.

Frieden was despondent until his father reminded him there was another college in town. The problem was there were so many stairs on the University of Tulsa campus that Frieden and his family had to meet the dean of admissions in the parking lot.

Still, the dean was determined; he wanted a student of Frieden’s caliber on campus. Together they gazed at the one building that was new and wheelchair-accessible.

The dean handed Frieden the course catalog and made a promise. Any course he wanted to take would be taught in that building.

Frieden loves that story. “You can make accommodations without great expense or great effort if you’re imaginative and thoughtful,” he said.

After graduating with a degree in psychology in 1971, Frieden earned a master’s degree in social psychology from the University of Houston, one of the first wheelchair-accessible campuses in the country, in 1979.

In between, from 1972 to 1975, he worked as an intern at Baylor College of Medicine and lived in a transitional living center, again one of the first in the country. It was a dorm of sorts, and the residents learned to work together to overcome their health problems.

It was there that Frieden met Mac Brodie, a Vietnam vet who had suffered a brain injury. Soon they teamed up and moved into a house in southwest Houston. Brodie helped Frieden with his physical needs, and Frieden inserted order into Brodie’s chaotic life.

Their household was only improved when Frieden met and married Joyce Cassel in 1977. She, too, uses a wheelchair, but she has full use of her arms.

Frieden’s face brightened at the mention of his wife. “I love her for her beauty and her brains,” he said. “That she can drive and cook are added bonuses.”

As a researcher and professor at Baylor, Frieden spent much of the late ’70s and early ’80s interviewing people who had disabilities similar to his.

His question: Why are some Americans who are considered totally disabled living active and productive lives while others with the same issues become, as Frieden described it, transfixed.

The answer, Frieden said, is that those able to maintain ties to family, friends, neighbors and medical support also retain their zest for life.

In 1983, Frieden testified before Congress, explaining the need for an increase in independent living services and support. The next year Frieden was named director of what was then the National Council on the Handicapped in Washington. From 1984 to 1988, he, his staff and other council members produced what would become the first draft of the ADA.

Frieden was scheduled to present the document to President Reagan on Jan. 28, 1986, but on that tragic day, the space shuttle Challenger exploded. The meeting with Reagan couldn’t be rescheduled, so Frieden eventually met with then-Vice President George H.W. Bush.

Four years later, Congress passed the ADA and Bush, then president, signed it in July 1990.

“The ADA, for people with disabilities, is tantamount to the Voting Rights Act or the Civil Rights Act — it liberated a cross-section of Americans,” said Mark Updegrove, director of the LBJ Presidential Library. “And Lex was a chief architect. He’s made an enormous contribution to American life.”

Frieden, back in Houston in 1989, helped establish a regional center that advised businesses trying to comply with the new federal law and disabled citizens confronted with discrimination.

These days Frieden works as a professor at The University of Texas Health Science Center at Houston and director of the Southwest ADA Center at TIRR Memorial Hermann.

At present, 56.7 million Americans live with disabilities. With the graying of 76 million baby boomers, those numbers are expected to skyrocket.

Nursing homes won’t be able to handle the crush, Frieden said. Besides, as he’s been saying for decades, people with disabilities are just like everybody else. They don’t want to live in institutions. They want to live at home.

“The crisis is looming,” Frieden said, “but we can fix this. Hey, we did it with the ADA.”

Stem-cell research is exciting, but not to investors