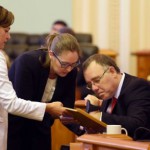 A far north Queensland man has become the first quadriplegic Member of Parliament anywhere in Australia.

Rob Pyne was sworn into state parliament this week after winning the seat of Cairns with a swing of 17 per cent after preferences.

It is one of the biggest swings achieved in the state.

Before the tilt at state politics, Mr Pyne had built a public profile as a local councillor but his detractors tried to shame him in the campaign for his disability.

Three days before the election, an anonymous video emerged online, with the message: “Rob Pyne, he’s a good bloke but… he can’t do a complete job”.

Mr Pyne brushed it off.

“I learnt to develop a thick skin, and if you’re going to break down when people start to criticise you, you’re not going to last long in public life,” he said.

“Before getting into politics people would always say how wonderful you are, what an inspiration you are, so I was very keen to work in a field where you didn’t get any easy passes.”

Mr Pyne was 23 in 1991 when he dived off a boat into Cairns’ Trinity Inlet, breaking his C5 and C6 vertebrae.

It left him paralysed from the chest down, with about 50 per cent use of his arms.

Mr Pyne said disability issues will be one of his passions and hoped to inspire younger generations.

“I acknowledge I’m performing the role of a role model somewhat,” he said.

“If there are young kids in Queensland in special education units or in mainstream schooling that can be inspired to reach for their dreams because of what I’m doing I’m more than happy for that.

“So let’s clear the hurdles so we can have more and more people with disabilities achieving in future years.”

The 150-year-old Queensland Parliament had to undergo numerous renovations to accommodate Mr Pyne.

Parliament’s Clerk Neil Laurie said the most major change was removing two seats and their desks in the chamber to create a bay for Mr Pyne to reverse his wheelchair into.

The public gallery however is still one of the least accessible areas, due to its steep, narrow steps.

“I’ve worked at the parliament now for close to 25 to 26 years and I’ve seen a lot of modifications for disability access over that period of time, but certainly some of the matters have been fairly late in coming.”

Mr Pyne’s wife Jenny is his carer, and travels with him wherever he goes, including flying to and from Brisbane with him for sittings.

“There are still people out there who think you need legs to do a job, the ability to walk, he’s gone out and he’s proved them all wrong,” she said.