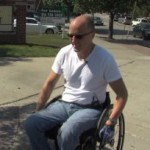 Ever since a motorcycle accident seven years ago, Lane has had to learn how to navigate life on another set of wheels. When he’s not driving, Lane is rolling. It’s a skill he learned after his accident.

Lane’s back snapped and he became paralyzed from the waist down. He’s had to find mobility another way.

It’s been an adjustment. He normally stands at 6’4, but when sitting Lane barely tops four feet. The height he lacks is no hindrance to his abilities. Lane is a triathlete, world traveler and a yogi.

“Just because you’re in a wheelchair, it doesn’t mean your life is awful or terrible,” he affirmed.

But there are difficulties doing every day things. Cracks on sidewalks turn into obstacle courses and grocery shopping becomes a mental game.

“I’ve had debates sitting at the grocery store, do I really need that?” he said as he reached for something in the air.

But perhaps the hardest question he asks himself is something we all ponder.

“What do I make for dinner?” he said.