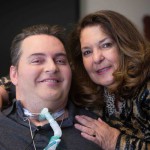 It’s the hugs that Jay Hawthorne misses most.

A ventilator-dependent quadriplegic for the last 15 years, Hawthorne used to enjoy feeling his grandmother’s comforting presence envelop him. A ladies’ man, he used to bench press 350 pounds and run 5 miles just for fun.

He used to be able to whistle without feeling winded.

After falling from 14 feet in a construction accident, the Hockessin iron worker broke his neck and resigned himself to spending the rest of his life in a $20,000 chair.

“Can you empty my pee bag?” he called out to an in-home nursing aide recently, before asking his mom to fetch him some tea with a straw.

Some look at the 42-year-old in sweats as a wake-up call, a reminder to appreciate what you have. Others regard him with pity, wondering why he doesn’t just curl up in a ball and waste away.

Truth is, Hawthorne can’t curl up in a ball. And he won’t.

Doctors initially gave him 17 years to live, but he’s not going out like that.

On Saturday, Hawthorne will tell his life story for the first time in public to inspire others with spinal cord injuries and form a support network. He will discuss his battles with drugs, alcoholism and gambling during Delaware’s first Spinal Cord Injury Awareness Day. His friends and family were able to secure an official state proclamation.

Sharing the stage at the Well Coffeehouse and Marketplace in Hockessin will be his “big boss,” older sister Laura Hawthorne. The Christian singer will perform her song, “Ease the Pain,” also known as “Jay’s Song.”

“Where are your heroes now?/They took their love and left you waiting/Well you’re finding your way out/Through a world that’s suffocating.”

Jay knows there is a higher purpose to his suffering, Laura insists. “It just has taken a long time to come full circle.”

Jay was living large, even while living paycheck to paycheck.

A photograph of him at age 24 – three years before the accident – shows a heartthrob who could rival Tom Cruise circa “Top Gun.” Wearing a white crewneck, he crosses his arms over his broad, tanned chest and flashes a self-assured grin.

“He had girls out the yin-yang,” remembers his mother, Judith Carroll.

Growing up in a single-parent household near Little Italy, Jay began experimenting with alcohol and drugs at age 11, his sister recalls. Years of destructive behavior followed.

On a spring day in 2000, he was helping to construct a building near Delaware Memorial Bridge. A wind gust caused a piece of sheet metal to slam into his back.

Jay fell 14 feet to the platform below, landing on his head.

He wasn’t wearing a helmet.

He recalls thrashing his head and arms, and pleading with God before being airlifted to Christiana Hospital. Within the first few days, the swelling of his spine had rendered his arms and legs useless.

Jay parted ways with his girlfriend and many friends who claimed they couldn’t handle seeing him so helpless. One sat and cried with him before walking out the door, never to visit again.

An avalanche of anger consumed Jay, but he had no physical outlet. He grew insecure about his looks and expressed regret for not getting married and having children. His first drawing in art therapy said “F U,” recalls Laura, a former Miss Delaware Teen USA.

Had he been able to use his arms at the time, she says, he might have ripped out his breathing tube.

Laura stayed with Jay that first year to handle his financial and legal affairs. She recalls leaving his hospital bed to grab some lunch and returning to find paddles on his chest to revive him.

She also remembers three weeks of agony, hallucinations and unanswered pleas when he was detoxing from the morphine the hospital gave him.

At the time, Laura consulted lawyers about suing Jay’s company for safety violations. One attorney dismissed her, explaining that Jay would receive only $100,000 for each limb.

In the end, Jay won a $19 million settlement from his company, which he declined to name. Immediately, he built a 7,000-square-foot mansion in Hockessin and began his “rock star” phase, partying hard with drugs, alcohol and women.

“It would take me out of reality,” he says in between labored breaths.

New friends followed the cash, and soon Jay’s builder, financial adviser and third cousin by marriage were all stealing from him, he says. He visited Atlantic City three times a week, dropping $40,000 a pop.

“I did some wild stuff in the wheelchair,” he admits, without a trace of regret.

But at the end of his reckless, six-year binge, much of the settlement money had disappeared. Jay lost a girlfriend, his former nurse, and created strained relationships with family.

“It was probably the worst thing that could’ve ever happened to him – having so much money,” says Laura.

Everyone agrees that Jay should have been dead multiple times over. There was the time he flipped over his wheelchair while trying to play kickball; the infected bedsores down to the bone; the drug overdoses; and the multiple incidents of his ventilator popping out or nearly conking out. One time, Jay’s grandmother, a Depression-era baby, had to manually pump air into his lungs.

“There’s no other reason besides God to keep me alive,” he says.

As many as 450,000 people in the United States are living with such injuries, according to the National Spinal Cord Injury Association. Car accidents, falls and gunshots are the three leading causes.

Most people survive for at least 20 years, according to association data, but mortality rates could be higher because of underreporting. The leading cause of death are respiratory diseases, such as pneumonia.

Adjusting to paralysis takes years, according to Nancy Rosenberg, a clinical psychologist at Magee.

How one reacts largely depends on his or her psychological state before the accident and the extent of the support network, Rosenberg says. “They figure it out somehow because the human spirit is so strong.”

Magee offers a monthly support group that is free and open to the public, and will soon provide Skype access. No similar program exists in Delaware.

Rosenberg also runs a hospital-wide peer mentoring program, linking about 200 trained mentors who are partially or fully paralyzed with the newly injured. One of her patients has been on a ventilator for 30 years.

She often hears from patients whose marriages are falling apart or who worry that they’ll never find an accepting partner.

“The caregivers become their lifeline,” she says.

Still a 6-foot-tall charmer with an ornery sense of humor, Jay wonders if he’ll ever find love again. Doctors have told him a child might be a possibility through artificial insemination.

These days, he is grateful. He can move his cheek to receive a kiss and shrug his shoulders, unlike the late actor Christopher Reeve. He is not living at the YMCA like one paralyzed friend.

He also can breathe on his own long enough to take a shower, something his first doctors never thought possible.

When the weather is nice, Jay is up by 10 a.m., visiting the supermarket or Christiana Mall, fishing on the Indian River or attending a Phillies game or an Alcoholics Anonymous meeting. He estimates he has put 5,000 miles on his chair in five years.

His nurse will pack up the van, and Jay will sit in a beach chair at Bellevue State Park near Wilmington, watching the kids play basketball. Or he’ll visit a casino and gamble with $100.

But on a recent overcast day, he sat in his kitchen wearing a ski hat, complaining of intense stomach pain and cabin fever. An aide stood by, reading aloud Jay’s text messages from Laura before stabbing the keyboard with her banana-yellow fingernails.

The chill in the air caused Jay to discuss moving to Florida, where the warm sun would rejuvenate him and help him get back in shape.

After taking care of her son full-time for two years, Judith knows how difficult it is to establish a reliable medical team. Just getting Jay in bed involves a sling and hydraulic lift.

Near where Judith was seated hung a crammed schedule of Jay’s round-the-clock nursing care, Medicaid pays for 96 hours of care a week, but Jay must make pay the rest out of pocket.

He now takes 30 pills a day and was diagnosed with diabetes last year. He maneuvers his chair by taking shallow inhales through a tube.

Either through technological advances or by God’s hand, Judith is confident that her son will walk again.

“I just know that he’s going to be healed someday,” she says, before Jay tells her to “ease up with the God stuff.”

Last Easter, Jay vowed to be a catalyst for change.

He was introduced to Mary Lou Inzerillo, a doctoral student in pastoral care at Neumann University in Aston, Pennsylvania. Inzerillo had heard Laura’s CD and saw a YouTube video dedicated to Jay.

“He is one of the most determined individuals I’ve ever met,” Inzerillo says.

She organized the Well event so Jay could launch a Delaware spinal cord injury support group.

“I’m gonna have quit your cryin’ meetings and cry your eyes out meetings,” he says, grinning.

Laura will return to perform in her hometown for the first time since high school. A longtime national anthem singer for the Mets, she sang “Ease the Pain” in front of Jay at Shea Stadium in 2011 as part of a spinal cord injury awareness game. In July, she will audition for “The Voice” reality competition.

Jay’s tragic accident is his cross to bear, says Laura. But perhaps he wouldn’t be here otherwise?

Baby brother agrees. If the accident hadn’t slowed him down, he says, he likely would’ve died or been locked in prison.

“I had to grow up eventually.”

By: Margie Fishman, The News Journal

WHERE: The Well Coffeehouse and Marketplace, 6949 Lancaster Pike in Hockessin

Able brothers fritter their time away