Numbers Tell The Tale Of The Wings For Life World Run 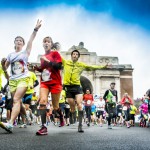 Now the dust has settled on an unforgettable day of running and inspiration, the numbers that lie behind the second Wings for Life World Run show how the event captured the world’s imagination.

Encouraged and supported by thousands of volunteers, athletes from all four corners of the globe came together on Sunday, not just to provide a true sporting spectacle but also a formidable demonstration of determination and fun.

And the figures are finally in…

There were 101,280 registered athletes for the event including competitors from 155 nationalities, not far short of the number of member states in the United Nations.

€4.2 million ($4,758,810) was raised for Wings for Life to take the foundation another step closer to finding a cure for spinal cord injury. 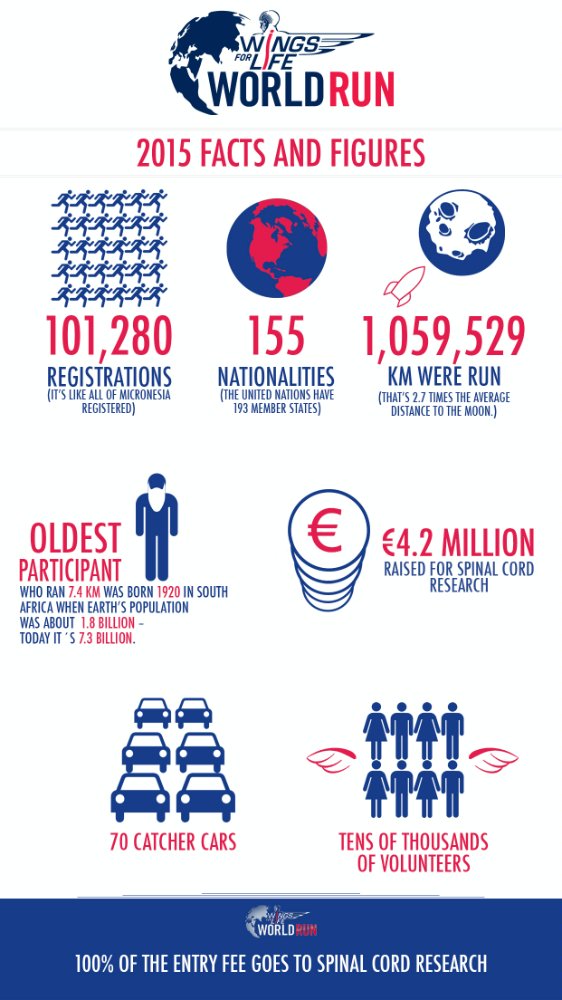 Tens of thousands set off on Sunday after completing their training sessions, and their hard work showed as 70 Catcher Cars, the moving finishing lines, reeled them in worldwide.

A staggering 1,059,529 kilometres of running was pounded out on Sunday, the equivalent of over 2.7 trips to the moon.

The oldest participant, who was born in 1920, lined up with her younger rivals in South Africa and ran 7.24km.

Most remote Selfie Run participant ran in Vestvågø, Norway, in the Arctic Circle.

Ethiopian Lemawork Ketema completed a back-to-back victory with his run of 79.9km in St Polten Austria while in the women’s race, there was a maiden win for Japan when Yuko Watanabe sailed home to victory in Takashima after completing 56.33km.

Find out more and register for 2016 at www.wingsforlifeworldrun.com.

NEWSROOM
The Wings for Life World Run Newsroom is the central database for all content related to the world’s only global running event. Content bundles will be updated throughout the day. Interested media may register for free at www.wingsforlifeworldrunnewsroom.com.

ABOUT THE WINGS FOR LIFE WORLD RUN LIVE EXPERIENCE
The Wings for Life World Run is not just a race in 35 locations but a truly global media event of epic proportions. More than 200 cameras follow the action as it takes place around the world. Around 400 satellite segments are being used to bring the world’s most unique running event to every living room around the globe. Furthermore a live radio stream at www.wingsforlifeworldrunradio.com, interactive maps, race statistics and news are being provided as the action takes places. All coverage can be found at www.wingsforlifeworldrun.com and viewers are invited to join the conversation on Twitter (@WFLWorldRun, #WorldRun), Facebook (facebook.com/ WingsForLifeWorldRun), and Instagram (@wflworldrun).

ABOUT THE WINGS FOR LIFE WORLD RUN
Introduced in 2014, the Wings for Life World Run is a global running event held annually in May. On May 3, 2015, athletes in 35 locations around the world started at precisely the same time, 11am UTC. As if that wasn’t unique enough, the race has no finish line. Instead, the runners are followed by a Catcher Car, which takes off 30 minutes after the start at 15km/h and steadily increases its speed until the last athletes have been caught. Two-time global champion, Lemawork Ketema, was caught after 78 km in 2014 and 79.9km in 2015. The Wings for Life World Run App is available for training and registering for the Selfie Run. Learn more: www.wingsforlifeworldrun.com