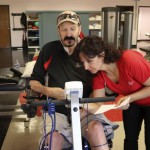 Clinton Township — Charlie Parkhill talks with his hands. It’s remarkable, given that 17 years ago, an accident left him unable to move his body below his neck.

Parkhill was a CPA with his own business when, in 1998, he went on vacation with his wife to Mexico. While he was coming out of the water, a giant wave hit him and knocked him onto his head, bruising and partially severing his spinal cord.

The doctors told him physical therapy beyond the first year was a waste of time, that he would never walk again. But Parkhill was stubborn.

“I just refuse to quit,” said the 60-year-old from Bloomfield Hills. “We’re sitting here 17 years later, and yesterday I walked my second-longest walk ever.”

The accident also changed his career, and would eventually lead him to co-found two therapy centers to help others with the same kind of injuries.

The game-changer came two weeks into outpatient therapy, when Parkhill met physical therapist Polly Swingle. She was pioneering a high-intensity type of therapy for people with spinal cord injuries and traumatic brain injuries.

“With every patient I have ever worked with that has suffered an injury that affected their walking, the No. 1 thing that they want to do is walk. I realized that to accomplish this, therapy being provided has to be intense, challenging every muscle in the body, and be provided by a skilled therapist,” said Swingle.

“Science was also saying that to relearn a task, it takes at least 10,000 repetitions to make this happen.”

In the intervening years, this kind of therapy has become commonplace at centers across the country. But at the time, it was relatively new.

Parkhill shared Swingle’s vision and agreed to become her test subject. Within two months of intensive exercise on various machines, Parkhill was able to walk on the treadmill, without being propped up or supported, for 40 minutes.

It changed his life.

But rather than stop there, Parkhill decided to change the lives of others.

“When I saw what Polly created for me, I wanted to do this for everybody who had this kind of injury,” said Parkhill.

That’s when the two began making plans to open a therapy center to provide the same kind of care to others.

With a staff of 34 and more than 350 clients coming to receive therapy every month, The Recovery Project offers high-intensity therapy on specialized machines as well as medical massage and occupational, orthopedic and speech rehabilitation. There is also therapy of the vestibular system that helps guide the sense of balance.

After Parkhill’s injury, it became too hard to meet with clients for his CPA business. Now, he runs the business operations at the therapy centers he co-owns and exercises daily on-site.

“I designed this space to be what I would like to have when I come in,” said Parkhill. “We want it to be like ‘The Wizard of Oz,’ when it turns to color.”

After years of patient success stories, The Recovery Project has gained a reputation and more doctor referrals. The difficult part, says Parkhill, is that he knows they can never actually “fix” someone.

“Every single person who comes here wants to be here, is dying to be here,” he said. “But you don’t get fixed. Our mission is to give people the highest quality of life possible.”

For Jerry Arnold of Sterling Heights, that means one day being able to ride his Harley again.

Arnold, 73, was in a car accident in September. The seat belt that saved his life crushed his chest during a second impact, stretching the nerves in his shoulder, arm and wrist and breaking some of his bones.

It’s been tough for Arnold, who was an avid motorcycle rider before the accident.

“It took my lifestyle away,” he said. “I want to get back on my bike and ride.”

Therapy has helped mentally and physically.

“I see the people in therapy and I don’t care how bad you are: When you’re in these places, there’s always someone worse off than you,” said Arnold. “It’s a blessing I can walk and talk.”

Seeing what his clients accomplish has been healing for Parkhill. It’s also led to his role as a philanthropist and advocate.

Parkhill and his wife started the Mary and Charles A. Parkhill Foundation for Spinal Cord Rehabilitation. It helps pay for therapy for people with injuries similar to his. They’ve raised $400,000.

Because these are lifelong conditions and intensive therapy is costly, many people who could see an improvement over time simply do not have the money to get the treatment.

That’s another reason why Parkhill has spoken out against the Michigan Legislature’s attempt to change no-fault car insurance laws. He testified April 30 before the House Insurance Commitee in Lansing.

“If this passes, there are so many people behind me that will get injured and not have the same opportunities Polly gave me,” said Parkhill.

With so much he can’t control, Parkhill chooses to focus on what he can do for others.

“Nobody can get from the day of the injury to anything meaningful without rehab,” he said. “If we can’t be the conduit, people won’t get better, they won’t get back to work, back to school.”

As for his own goals, Parkhill has always been stubborn.

“My goal,” he said, “is to take one more step next week than I did this week.”

How he walked again

Therapist Polly Swingle started Charlie Parkhill, who had been injured in a beach accident in Mexico, on an unweighted treadmill program, before it was a recognized treatment.

She took him from the first three-minute session with 150 pounds, unweighted, to 40 minutes with no un-weighting. Progressing through walkers and crutches, Parkhill took his first three unassisted steps in 2005 and “has recently walked over 100 feet,” The Recovery Center says.

By Lauren Abdel-Razzaq, The Detroit News