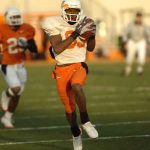 Sophomore wide receiver Artrell Woods makes a catch in the Spring game. Woods is steadily making progress as he continues to rehabilitate his back injury.

When sophomore wide receiver Artrell Woods was hurt in a weightlifting accident in the offseason, it was unclear whether he would be able to play football or even walk again.

On July 13, he suffered a fracture dislocation of Vertebrae and an incomplete spinal cord injury.

On Saturday, Woods was standing on his own two feet on OSU’s sideline as the Cowboys beat Florida Atlantic.

Sophomore safety Andre Sexton said Woods has come a long way, and it was inspirational to see him standing with the team.

“[It’s great] for him to come back and be able to cheer us on and just be able to walk again and be around the sport he loves so much,” Sexton said. “It’s a big energy boost for all of us. It makes you go out there and give it your all just for him and yourself.”

When the Cowboys travel to Troy on Friday, Woods will probably not go because of the limitation on the number of players teams are allowed to bring. But sophomore defensive back Perrish Cox said being able to see him standing has given him a sense of hope.

“That’s my boy; it’s like a motivation that I see my boy out there,” Cox said. “He’s walking again. At the time [of the accident], I was hearing that he had dislocated his spinal cord. I know that’s bad. I’m just glad he’s walking again.”

Woods was unavailable for comment, but Cox said Woods’ recovery is going well, and at times Woods doesn’t have to wear his back brace.

“He’s moving around real well,” Cox said. “Sometimes, I don’t even think he [has his brace] on.”

On Sunday, Buffalo Bills tight end Kevin Everett suffered a life-threatening spinal cord injury while making a tackle and is unlikely to ever walk again. Coach Mike Gundy said he didn’t talk to the team about the situation.

“I hate to hear that; it makes me wonder why I played,” Gundy said. “Obviously, this is a tough game. Unfortunately, [injuries] come with the territory.”

Sexton said hearing about Everett’s injury made him more thankful Woods has recovered so well.

“One minute, he’s there normally, and the next thing you hear, he might not play football again; his career is over,” Sexton said. “It was just working out, too; it just happened during a freak accident.

“You just never know what could happen, so you just go out and try to enjoy it, every second you can on the field,” Sexton said.

It looks as though Woods will get a second chance to enjoy playing football, maybe as soon as next season. Cox said he knows Woods is working hard to get back to his old form.

“[Playing again] is all he talks about,” Cox said. “We still have our same talk about doing this and that during the season when he comes back. It’s gonna happen.”