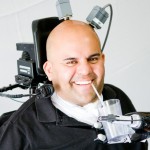 Erik Sorto, a 34-year old American, has been unable to move his arms or legs for more than a decade, since a gunshot wound left him paralysed from the neck down. Even now, he misses the little things.

“I want to be able to drink my own beer – to be able to take a drink at my own pace, when I want to take a sip out of my beer and to not have to ask somebody to give it to me,” he said. “I really miss that independence.”

Sorto was recently able to fulfil this goal, when he became the first person in the world to have a neuro-prosthetic device implanted in a region of the brain where intentions are made.

Just by thinking about it, Sorto was able to control a robotic arm to drink from a bottle using a straw, perform a smooth hand-shaking gesture, and even play “rock, paper, scissors”.

He describes bring able to directly control the robotic arm as like “an out-of-body experience”.

“I wanted to just run around and high-five everybody,” he said following the laboratory trial.

The advance, which blurs the boundary between man and machine, raises the prospect of patients with spinal injuries being able to seamlessly control robotic limbs or even entire body suits in the future.

Previously, scientists have successfully demonstrated similar technology in amputees, where the spinal cord and nervous system remain intact. This means that electrical impulses can be read out from nerves in the arm and used to control the prosthetic. In the case of a spinal injury patient, however, the signals need to be decoded directly from the brain.

Until now, scientists have focused on the brain’s motor cortex, which generates the electrical signals that are sent down the spinal cord and control the contractions of every muscular movement.

However, the resultant neuro-prosthetics, which have been trialled on a handful of patients, produced movements that were delayed and jerky: not the smooth and seemingly automatic gestures associated with natural movement.

In the latest trial, scientists inserted implants into the “higher” brain region, called the posterior parietal cortex (PPC), that gives rise to the intention to move, rather than the details of how we execute the movements.

Richard Andersen, who led the trial at California Institute of Technology, said: “When you move your arm, you really don’t think about which muscles to activate and the details of the movement – such as lift the arm, extend the arm, grasp the cup, close the hand around the cup, and so on. Instead, you think about the goal of the movement, for example, ‘I want to pick up that cup of water.’”

By decoding a person’s actual intention, the scientists were able to do better at achieving their goal.

Sorto was shot in the neck at the age of 21, at a time when he was involved in gang activity. He has since earned a college degree and now serves as a peer mentor to others who have suffered spinal cord injuries, but relies on others for any movement he needs to make.

After enrolling to be involved in the research, Sorto underwent surgery in 2013, during which he had a pair of small electrode arrays implanted in two parts of the PPC – one that controls reach and another that controls grasp.

Each four-by-four-millimetre array contains 96 electrodes, each recording the activity of single neurons. The arrays are connected by a cable to a system of computer processors that decode the brain’s intent and turn this into movements of the robotic arm.

After recovering from surgery, Sorto tested his ability to control the arm in the laboratory, something he described as surprisingly easy.

“It was a big surprise that the patient was able to control the limb on day one – the very first day he tried,” said Andersen. “This attests to how intuitive the control is when using PPC activity.” 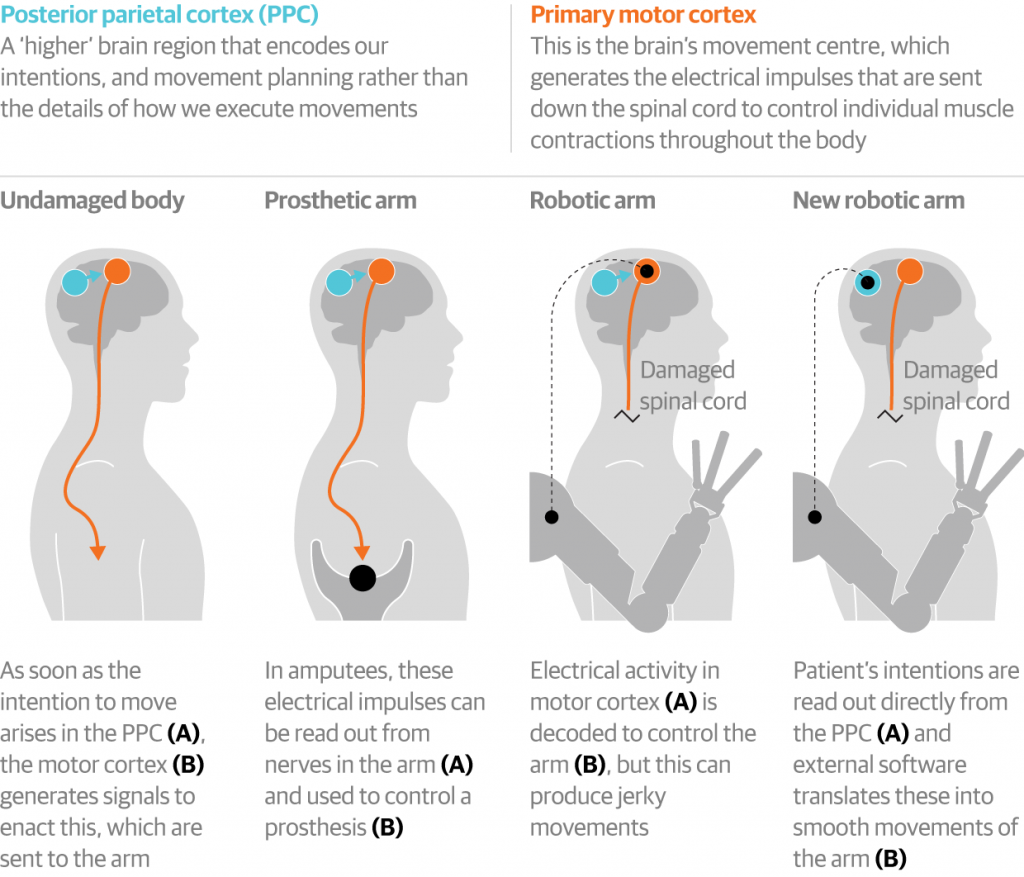 Following several weeks of training, Sorto learnt to control a computer cursor, drink from a bottle using a straw and make a hand-shaking gesture.

In a video, from one of the sessions, he beams with joy after successfully taking a sip of a drink and exclaims “that’s so awesome!”, while raising the black prosthetic arm aloft in a triumphant gesture.

“This study has been very meaningful to me,” said Sorto. “It gives me great pleasure to be part of the solution for improving paralysed patients’ lives. I think that if it were safe enough, I would really enjoy grooming myself – shaving, brushing my own teeth. That would be fantastic.”

“We are at a point in human research where we are making huge strides in overcoming a lot of neurologic disease,” said neurologist Christianne Heck, of the University of Southern California. “These very important early clinical trials could provide hope for patients with all sorts of neurologic problems that involve paralysis such as stroke, brain injury, ALS and even multiple sclerosis.”

Andersen and colleagues are now refining the technology so that is could eventually allow patients to perform finer motor skills. To do this, they believe it will be necessary to create a prosthetic that provides sensory feedback from the robotic arm to the brain, rather than the system working as a one-way stream.

“To really do fine dexterous control, you also need feedback from touch,” said Andersen. “Without it, it’s like going to the dentist and having your mouth numbed. It’s very hard to speak without somatosensory feedback.”