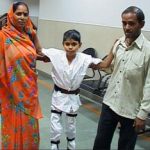 New Delhi: A 10-year-old boy from a village in Uttar Pradesh has gained a new lease of life after the doctors at AIIMS operated upon him.

Premchand, a victim of a tractor-related accident had suffered massive injury to his spine. But a marathon 8-hour-lon operation by a team of doctors at AIIMS has ensured that he can look forward to life.

Dr MC Misra, HOD Trauma Centre said, “”What I can say is that I have not seen such a case before, in my 35 years of career and in dealing with trauma.”

In the accident almost 10-months ago, Premchand’s spinal cord was broken into two pieces and almost bent like a bow. The injury paralysed Premchand below the waist damaging his nervous system in such a manner that he lost his urinary control, bowel movements and sensation.

But today, Premchand is finally on his way to recovery, walking around in the hospital room with a little support from his parents at his shoulders.

“He also made neurological recovery. which was again a surprise for us. I am sure, he has regained 70 per cent power now in the muscles of the girdle and the lower limb,” marvelled Dr Misra.

His parents recount the days when they were advised by some in the village to give up hope that the boy would survive, let alone walk again.

“Everyone would tell us that this child is not going to make it. But the doctors here have proven to be God,” said his mother.

An accident like this is usually fatal in nature, but some cases like Premchand survive. Sometimes, it is the biological twist of the injury that allows recovery. At other times, it is merely like what Premchand’s mother says, “God saved him. He who is protected by God, can be felled by none.”

Premchand’s smile tells how happy he is with the recovery.

U of G Leaders to Spend Day in Wheelchairs to Raise...