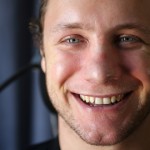 Injured wakeboarder Brad Smeele is forging an independent life in a newly modified home after a horror crash left him a quadriplegic almost a year ago.

The 28-year-old ploughed head first into a ramp when attempting to land a world-first trick on a ramp at his Florida training base last July, leaving him paralysed. He was saved from drowning by horrified friends.

Smeele cheated death again after his heart stopped beating when he was coming off his ventilator in hospital in the US.

The former junior world champion spent weeks in hospital before returning to New Zealand in October. And last month his recuperation took a significant step forward when he moved from a therapy centre into a house on Auckland’s North Shore.

He is pinning hopes on groundbreaking spinal research at Auckland University where naturally-occurring protein is used to regenerate nerve cells. Laboratory tests have proved promising and Smeele wants to be first in line for clinical trials.

“I’ll be figuratively putting my hand up to be part of that,” he told the Herald on Sunday.

In the meantime, he has formed a pact with a friend to keep his hair growing until the day he walks again.

At times, the past 11 months had dragged. But being surrounded by family and friends had helped once he returned to New Zealand, he said.

“I went from a free sporting life travelling the world when I wanted, to a strict scheduled routine from the time I wake up to when I go to the toilet.”

Intensive therapy meant he was slowly getting more strength in his shoulders and showing encouraging movement in his biceps and wrists.

He said he was using the determination and focus gained from setbacks encountered as he fought to get to the top of his sport.

Smeele viewed footage of his crash just three weeks after being hospitalised.

“It just brought back the incident and I was like, ‘Why did I do that’?”