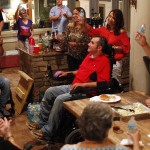 When the room was just four concrete walls, before it was outfitted with state-of-the-art therapy equipment and a sign that says “Never ever give up,” Romulo and Gabriela Camargo invited a Toyota executive to take a tour.

The couple had been raising money for years, scratching toward their goal of one day opening a recovery center for people with spinal cord injuries, who, like Romulo, were living with paralysis.

Seven years earlier, Romulo — “Romy” — was shot in the neck during an ambush in Afghanistan while serving as an Army Special Forces officer. He came home a quadriplegic.

After years of driving Romy from Tampa to Orlando for intensive therapy, his wife came up with the idea to open their own nonprofit center right here. They’d call it StayInStep.

But they needed money.

“I always told her that her vision is going to be a reality once we get the right people involved,” Romy said.

In January, they crossed their fingers as the Toyota executive looked around, and thanked God when they learned the company would donate $300,000, the final push they needed to open the doors.

On Saturday afternoon, before friends, family and donors, the Camargos unveiled the facility at 105000 University Center Drive in North Tampa.

Bullets were spraying when Romy went down. Army medic Steven Hill rushed over, straddled Romy’s bleeding body, and started breathing for his friend.

“Save him, Steve!” a fellow soldier shouted between gun blasts.

The bullet had ricocheted off Romy’s C-3 vertebra, shattering the bone and damaging his spinal cord. Hill stayed with him until the medivac arrived.

A few days later, before Romy left for the States, Hill said goodbye.

Romy squeezed his hand and winked, Hill remembers, then told him, “It’s gonna be okay, man.”

When Romy arrived at Walter Reed National Military Medical Center in Bethesda, Md., friends and family were waiting. Among his visitors was Lt. Col. Scott Mann, who had served with Romy but then was transferred elsewhere.

Mann sat with his friend, helped suction spit from his mouth.

Now, both former comrades will work with Romy and Gaby at StayInStep — Hill as lead trainer and Mann as chairman of the board of directors.

“We’ve been together throughout,” Mann said. “Every step of the way.”

The center also has a separate family room where Gaby hopes to lead a support group for patients’ loved ones and a kids’ room outfitted with games and books.

Toyota will also donate a therapy robot to the center, as well as to the University of South Florida and the Haley VA medical center, said Simon Nagata, executive vice president of Toyota Motor North America.

Nagata was the executive who first toured StayInStep in January, who believed in the Camargos’ vision and greenlit the donation. He spoke at the grand opening Saturday.

“This is a very good day,” he said. “Romy and Gaby are two of the most inspirational people I have ever met. They refuse to give up.”

After Toyota surprised the Camargos with a brand new handicap-accessible minivan, but before the couple offered tours of StayInStep, Romy and Gaby had one final task.

A pair of large scissors in hand, Gaby stepped up to a thick red ribbon roping off the entrance. Romy, in his wheelchair, pulled up beside her. She grabbed his hand and placed it on the handle of the scissors, then laid hers on top.

And on the count of one, two, three, they snipped.