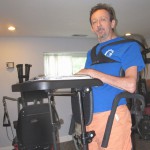 Standing in one place is exercise for Frank Muegge, 57. “I stand for an hour a day to prevent bone problems like osteoporosis.”

Muegge is paralyzed from the armpits down, the result of a car accident about 10 years ago. His arms work, but his hands don’t.

His paralysis is why he’s surrounded by advanced exercise equipment such as the machine that uses electrodes to stimulate his muscles. “The muscles still can work,” he said. “They just don’t get the signals from the brain.

“Muscles can atrophy really fast if I don’t do something.”

He gets around on a set of major league wheelchairs. One wheelchair he uses to push himself around his neighborhood, “about three, 3 ½ miles a day.”

The other chair resembles a science-fiction battle chariot — all-wheel-drive; thick, wide wheels; an off-road frame; capable of traversing deep woods; and capable of carrying hunting rifles. “It’s for when I go places where a regular chair would get stuck with those little front wheels,” he said. “It can climb at 45 degrees, a motor for each wheel.”

He turned the lower floor of his home into an apartment, modified for the machines he needs to get around since the accident. His adult son lives upstairs.

Muegge was in the back seat of a car during a vacation in Panama City Beach, Fla. Another car running full speed rear-ended the car he was in. His head hit the roof of the car and among other injuries crushed a vertebra and his spinal cord in his upper body.

He doesn’t remember the accident. “I remember two hours before the accident, then waking up a week later from a coma,” he said. “It was a rude awakening, humbling.

“One minute out (having fun) and the next, I’m saying how’d I get here? There are people out there worse off than me, but you don’t know how gifted you are until something like this happens.”

He was an aircraft mechanic and car racing enthusiast until the accident. He was part of a pit crew for a stock car racer. He was athletic and otherwise active.

He tried a desk job at the company where he worked, but that didn’t work out. So he’s retired and living on Social Security disability, medical benefits and savings.

“I did some good financial planning when I was young, otherwise, I couldn’t afford this (equipment),” he said. “That (off-road) chair cost $20,000. It’s from Australia. But if I couldn’t get around …”

In addition to the machines, he drives a specially equipped van and employs two assistants who help him with his daily routine.

“That was the hardest part,” he said. “Letting people help me.”

The van, unfortunately, has introduced him to another pain: people who aren’t disabled using disabled parking spaces and even disabled people using them in the wrong way.

He sees a lot of people who aren’t handicapped using vehicles owned by their disabled friends and relatives.

“I pull up to handicapped spots, and they’re full, then somebody comes prancing out of a store, or down the street and they don’t look disabled to me,” he said. “I ask them what kind of disability do you have and they say none of my business.”

Dr. Florian Thomas, a neurologist with St. Louis University who has treated Muegge, said the parking problem is more than an inconvenience.

“With these 90-degree days and Mr. Muegge’s injuries, his body has no means of temperature regulation,” Thomas said. “So if he has to park 100 yards from (his destination), he can (be put at risk) of illness or injury.”

Muegge’s spinal cord was crushed. Although not severed, it’s unlikely any therapy can reverse his condition.

The National Institutes of Health reports researchers are optimistic about new drugs that could help new cases of spinal cord injury repair and even regrow damaged nerves. However, it doesn’t work on old injuries, Thomas said.

Studies with the National Library of Medicine say spinal cord injury numbers remain steady, only rising as the population rises. The largest number is among men 16 to 44 and among them 16 to 24. However, as the U.S. population ages, more injuries are being reported by older people as a result of falls.

Other than accommodating the injury, Muegge says he hasn’t changed his life. He still attends concerts and theater. He reads car racing magazines and magazines on mobility.

Thomas calls that resilience. Some people suffer such an injury and fall into depression. Others seem to take it in stride and continue living well. A study in the scientific journal, Spinal Cord, said researchers identified six elements of people who do well despite spinal cord injuries: psychological strength, social support, perspective, adaptive coping, spirituality or faith and serving as a role model or inspiring others.

Patrick Rummerfield is considered the only fully functional quadriplegic in the United States, if not the world. He shares a bond with Muegge in that he suffered a neck injury in an auto accident that severed 85 percent of his spinal cord. Still, he races cars and holds several not-so-well-known speed records.

He works with Muegge at Kennedy-Krieger Institute with Johns Hopkins University. Muegge visits there once a year for examinations.

Muegge “has more spirit than 99 percent of the people you’ll run into,” Rummerfield said. “And he knows racing.”

Muegge doesn’t see himself as so extraordinary. “You just get back to life,” he said. “The alternative is you give up. I struggled at first.

“But you have to live your life. The alternative is pushing up daisies.”