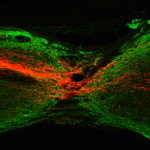 Researchers at the Hong Kong University of Science and Technology (HKUST) have found a way to stimulate the growth of axons, which may spell the dawn of a new beginning on chronic SCI treatments.

Chronic spinal cord injury (SCI) is a formidable hurdle that prevents a large number of injured axons from crossing the lesion, particularly the corticospinal tract (CST). Patients inflicted with SCI would often suffer a loss of mobility, paralysis, and interferes with activities of daily life dramatically. While physical therapy and rehabilitation would help the patients to cope with the aftermath, axonal regrowth potential of injured neurons was thought to be intractable.

No outside stimulants are needed; the growth driver lies within the neurons themselves.

Inside our DNA, in particular.

In the July 1st issue of The Journal of Neuroscience, HKUST researchers report that the deletion of the PTEN gene would enhance compensatory sprouting of uninjured CST axons. Furthermore, the deletion up-regulated the activity of another gene, the mammalian target of rapamycin (mTOR), which promoted regeneration of CST axons. Axons transmit information to different neurons, muscles, and glands; as bundles they help make up nerves.

Led by Kai Liu, PhD, the study’s senior author and assistant professor in life sciences at HKUST, the research team initiated PTEN deletion on mice after pyramidotomy. Similar treatment procedures were carried out on a 2nd group 4 months after severe spinal cord injuries, and a 3rd group after 12 months. The team recorded a regenerative response of CST axons in all 3 samples—showing that PTEN deletion stimulates CST sprouting and regeneration, even though the injury was sustained a long time ago.

“As one of the long descending tracts controlling voluntary movement, the corticospinal tract (CST) plays an important role for functional recovery after spinal cord injury,” says Professor Liu. “The regeneration of CST has been a major challenge in the field, especially after chronic injuries. Here we developed a strategy to modulate PTEN/mTOR signaling in adult corticospinal motor neurons in the post-injury paradigm.”

“It not only promoted the sprouting of uninjured CST axons, but also enabled the regeneration of injured axons past the lesion in a mouse model of spinal cord injury, even when treatment was delayed up to 1 year after the original injury. The results considerably extend the window of opportunity for regenerating CST axons severed in spinal cord injuries.

Compared with acute injury, axons face more barriers to regenerate after chronic SCI. Previously, scientists have shown that Axon retraction may further increase the distance that axons need to travel; Extracellular matrices, which become well consolidated around the chronic lesion site, also increases inhibition. Neuronal aging may also add obstacles to regrowth. In light of all of these challenges, it is indeed surprising to find that CST axons can still regenerate after 1 year.

“It is interesting to find that chronically injured neurons retain the ability to reform tentative synaptic connections,” says Liu. “PTEN inhibition can be targeted on particular neurons, which means that we can apply the procedure specifically on the region of interest as we continue our research.”

Provided by Hong Kong University of Science and Technology