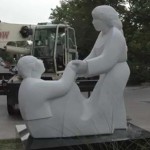 Englewood, CO–Craig Hospital will unveil a new sculpture at the hospital’s newly renovated front entrance on August 11, 2015, at 12:00 p.m. Colorado sculptor Madeline Wiener created the marble piece which depicts a woman helping a man off the ground.

“I hope that people immediately grasp the care given at Craig and the determination of the patient who may be in the worst shape on entry to Craig, but accomplishing the impossible,” said Wiener.

Wiener says she wants patients and families take away an important message: “Not to lose hope.”

Wiener’s connection to the project is considerably poignant given that her husband, Matt, was a Craig Hospital patient in 2010. Matt sustained a spinal cord injury in a surfing accident in 2009. He was a patient at Craig Hospital for 60 days in 2010.

“The concept came from the care and hope of improvement, when we didn’t really believe it was possible for him to move again; each day giving more hope.”

She says the teamwork between the staff and patient is an important message, “’Redefining Possible’ is what the staff does every single day there, so when I learned that motto, it was a natural to design a sculpture that showed the tender and determined strength of the staff and the willingness of the patient.”

The placement of the sculpture was also important to Wiener. “He is facing east, which is the progression of a patient, enter through the west [side of Craig] and leave from the east. The east represents his/her future.”

The sculpture is made from marble quarried form Marble, Colorado. It will be displayed in the front circle drive near Craig’s new accessible garden plaza. The garden plaza is part of Craig’s major campus expansion and revitalization project that began in 2011 and is scheduled for completion in 2016. The project adds approximately 85,000 sq. feet of new space, and includes the renovation of approx. 135,000 sq. feet of existing space in the West Building. The accessible garden plaza connects the West and East buildings to create a unified campus.

Sculptor Madeline Wiener studied at The New York School of Visual Arts from 1968-1974. She is the founder and director of The Marble Institute of Colorado. Her sculptures are all over the world, including Scotland and India.

The media is invited to the unveiling of the sculpture. A short presentation will begin at 12:10 p.m. and a celebration will follow.

Craig Hospital in Denver, CO, is world-renowned for the specialty rehabilitation and research for patients with spinal cord injury and traumatic brain injury. Craig is a 93-bed, private, not-for-profit, free-standing rehabilitation and long-term acute care hospital that provides a comprehensive system of inpatient and outpatient medical care, rehabilitation, neurosurgical rehabilitative care, and long-term follow-up services. Half of Craig’s patients come from outside of Colorado. Craig has been ranked as a Top Ten rehabilitation center by U.S. News and World Report for 26 consecutive years, since the rankings began. Craig Hospital has received the NDNQI® award as the nation’s top rehab hospital based on quality outcome measures four out of the last five years. Craig is designated by the National Institute on Disability Rehabilitation and Research (NIDRR) as a Model System Center for both spinal cord injury and traumatic brain injury. Craig is the NIDRR National Statistical TBI database for the other 16 Model System Centers in the U.S. Craig received the prestigious Magnet Recognition® for quality in nursing, in 2005-2010, 2011-2015, 2015-2020 and the Magnet Prize® Award in 2012. In 2013, 2014, and 2015, Craig was voted by employees as a “Top Work Place” by the Denver Post, and was ranked in the top 150 places to work in healthcare by Becker’s Healthcare in 2014. craighospital.org

Facebook
Twitter
Email
Mix
Digg
Previous articleDisabled veterans refuse to let their injuries slow them down
Next articleCommunication, Sport and Disability: The Case of Power Soccer